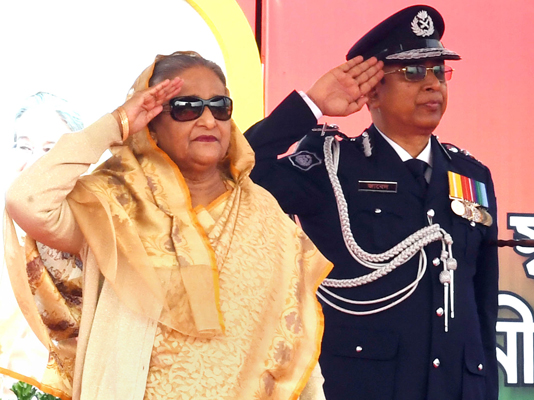 Prime Minister Sheikh Hasina today reiterated her government’s determination to build Bangladesh Police as a “modern and time-befitting” force to ensure desired services for the people. “We have been working on making Bangladesh Police as a modern and time- befitting force so that the people can get desired services from the law enforcement agency,” she said.

The prime minister said this while inaugurating the Police Week-2020 at Rajarbagh Police Lines here this morning. The premier said she regards the expenditure for people and their welfare as an investment. “In the same way, we also consider the allocation for police as an investment, not as expenditure,” she added.


She went on saying that there have been substantive qualitative changes in
police and the force is able to achieve the confidence and trust of the
people due to huge development activities taken by her government.

She also said, “We will push forward this development pace for the police
in days to come.”

On the occasion, an attractive parade was arranged at Rajarbag Police
Lines.

The prime minister inspected the parade and took salute of different
contingents of Bangladesh Police.


She later distributed medals to 118 police officials for their outstanding
contribution to maintaining the law and order in the society.

Sheikh Hasina hoped that the awards would motivate the police personnel to
be more spirited in discharging their duties, urging the law enforcers to
play more proactive role in ensuring road safety and eliminating drugs from
the society.


The prime minister said her government has taken various steps for the
overall development of the police force.

She continued that with the aim of uprooting terrorism from Bangladesh,
Counter Terrorism and Transnational Crime (CTTC), and Anti-Terrorism Unit
(ATU) have also been formed.

Two battalions of Armed Police and one battalion of RAB have been
established and deployed at Coxs Bazar to ensure the security of the Rohingya
camps and adjacent areas, she added.

Sheikh Hasina said that her government has established ‘Bangladesh Police
Kallyan Trust’ in 2000 for the welfare of police personnel.

“We have given police the Community Bank under the ‘Bangladesh Police
Kallyan Trust,” she added.

The premier said her government has sanctioned ration facilities for cent
percent police personnel which was only for 20 percent policemen before the
Awami League assumed office in 1996.


She also said life-long ration facility for the retired police members is
also in special consideration of the government.

To ensure treatment facilities for police members, she said “We have taken
effective steps to improve Divisional Police Hospitals including the Central
Police Hospital in Razarbagh”.

Stressing the need for raising awareness among the people, the premier
asked all concerned to obey the traffic rules.


She said her government has introduced the National Emergency Service-999
which has earned huge popularity under the supervision of Bangladesh Police
as they (people) easily avail the services of police, fire service and
ambulance by simply dialing 999.

Sheikh Hasina recalled with profound respect the sacrifice of the martyred
police members, saying, “The patriotic police personnel of Rajarbagh Police
Lines put up the first armed resistance against the Pakistani occupation
forces on the fateful night of 25th March in 1971.”

She also remembered 29 police officials who were killed in the mayhem
conducted by the BNP-Jamaat alliance in 2013, 2014 and 2015 in the name of
so-called movement.

She heavily came down on BNP-Jamaat alliance for killing innocent people by
arson attacks.


Appreciating the police force for saving the country from the devastation,
the prime minister said “Police put up resistance by risking their lives to
ward off the BNP-Jamaat’s mayhem in 2013, 2014 and 2015.”

The police also have played an important role in maintaining continuation
of the country’s democracy, she added.

She appreciated Bangladesh Police as it has recently recruited 10,000 new
constables in a transparent way setting an imitable example for all.

Stating that Bangladesh has adopted “zero tolerance policy” against
terrorism, militancy, corruption and narcotics, the premier said the
government is committed to stamp out the menaces from the country.

She highly applauded Bangladesh Police for doing a praiseworthy job to
bring the rumor mongers to book for spreading rumors by using social media
and other technologies to mislead the people.

The premier has sought all kinds of cooperation from the police as
Bangladesh has been advancing fast economically.


She described the year of 2020 as very important for Bangladesh, saying
this year, the country is going to celebrate the birth centenary of Father of
the Nation Bangabandhu Sheikh Mujibur Rahman who dreamt of building a “Golden
Bangladesh” free from poverty and hunger.

The prime minister said her government has been working for materializing the dream of Bangabandhu. She reaffirmed her commitment of making Bangladesh a developed and prosperous one in the South Asia by 2041.
(BSS)