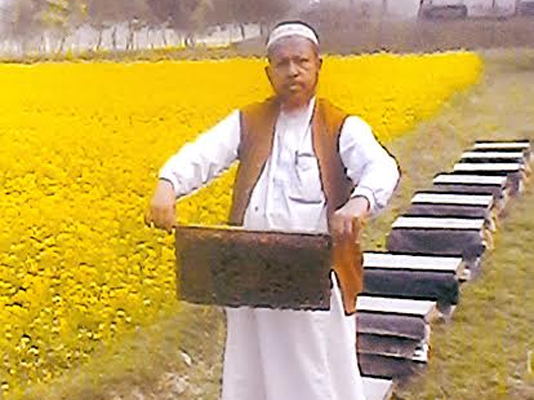 Many of the rural men and women specially self-committed persons are becoming active towards attaining their social dignity after being engaged in various income generating activities independently like honey farming. Nurzzaman Gaji a Islamic scolar and self committed person of Jinerdee union under Polash upazila of Narsingdi district become a successful small- entrepreneur through Honey farming.

He was talking to BSS correspondent on Sunday and disclosed that while he was receiving Imam training from Islamic Foundation, Narsingdi in the year 1998, he became inspired and came know about honey farming from his lesson and later he had started his honey farming business attracting local bees with 8 boxes.


Nuruzzaman said after taking training from local BSCIC office on Honey bee farming in 2012, he then started his honey farming business on large scale with 28 boxes by taking loan of Taka 2,00000 from Islamic Bank.

He said when some cash crops especially mustard, litchi, Coriander (donia), kalijira and pumpkin become flooded with flowers, he then starts his professional works along with his appointed workers in different districts using 60 boxes. He said, honey farming works begins from December 1st week and continuing up to June.


Gaji said yearly he collected through his bee hives about 500 kilograms of honey from different flowers when in the season. He said after preprocessing the collected honey in his local processing plant and then started marketing He expressed his satisfaction that his yearly net income from honey business is now about taka three lakh.

He said proper attention and technological support can make the honey production a huge profitable business for the country.
(BSS)