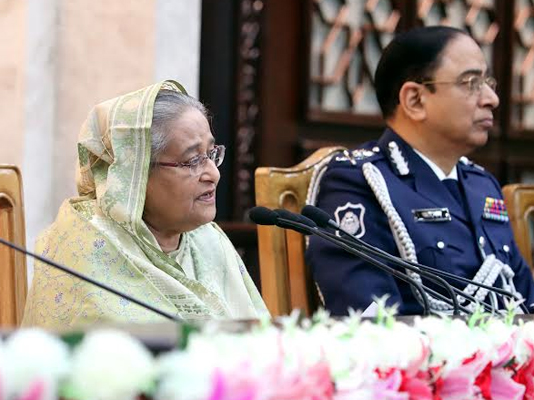 Prime Minister Sheikh Hasina today asked the police force to develop a more people-friendly image, appreciating its
achievement in the recent past in earning people’s confidence and trust to a great extent as the country’s main law enforcement agency.

“You will have to become ‘people’s police’,” she told a senior police
officers conference at her office as part of the Police Week-2020
celebrations.

The premier said police in recent years could largely defuse people’s
negative attitude towards them, which she said was the reality in the past.

“The public confidence and trust in the police have increased
significantly . . . this is what we need crucially,” she said.

Bangladesh’s police this year observe the Police Week-2020 that began on
Sunday coinciding with the Mujib Borsho with the theme being “Mujib Borsher
Ongikar, Police Hobe Janatar”.

The premier appreciated the selection of the theme calling it a very
important commitment in the in the present day context.


Sheikh Hasina said the introduction of the National Emergency Service-999,
largely boosted people’s confidence towards the law enforcement agency as
they now witness quick police response after calling the number.

The premier said police personnel were now getting appointments in the
Anti-Corruption Commission (ACC) while they should have their representatives
in other public organizations as well.

“We’ll take initiatives in this regard,” she said referring to a police
demand for their engagement beyond the force.

The Prime Minister, however, said various public organizations and
statutory bodies including the Anti-Corruption Commission (ACC) should keep
in mind their jurisdictions in performing their jobs.

She said ACC could issue directives to law enforcement agencies to
apprehend their suspects while it was not vested with the authority of arrest
anyone directly.

Sheikh Hasina also ACC also was not authorized to create any prison to
detain anyone after one’s arrest.

“Appropriate organisations will have to do their respective works and this
will have to keep this in mind,” she said.


The premier said a police unit was developed particularly to secure the
industries saying this specialized Industrial Police should be more
strengthened to ensure security in the 100 special economic zones being
established across the country.

Sheikh Hasina said police force now crucially needed a separate medical
corps of its own as the doctors from outside generally were unwilling join
the Police Hospital while the main law enforcement agency itself had many
physicians.

“A separate medical corps can easily be raised with police officials
having medical background,” she said.

The premier said though the existing government hospitals were equipped
with required facilities, a police medical corps could be run by their own
physicians.


Sheikh Hasina said nature of crimes was now frequently changing with rapid
development digital technology posing a challenge to police, which now
required the force to equip them with time-befitting training particularly to
handle the cyber crimes.

“That’s why, the capability of the police force needs to be further
strengthened,” she said and listed the steps taken already to increase its
manpower, proper training, forming special police units, building modern
labs, arranging vehicles and modern equipment.

Sheikh Hasina said the government widened the field of foreign training
for the police personnel and revealed a plan to set up a separate training
centre for the police women in future.

The premier praised the police role in containing terrorism, militancy and
terrorism and drug abuse and asked them to further strengthen their ongoing
drives to root out terrorism and narcotics.


The premier reminded all policemen of the force’s glorious role in 1971
Liberation War and its subsequent contributions to maintain law and order and
protecting public security in different national crises.

Sheikh Hasina said Bangladesh is now being treated as a role model of
development in the international world and added that the nation now expects
police to play their part in advancing Bangladesh’s development being imbued
with the spirit of 1971 and patriotism.

“Police is playing a commendable role in ensuring security to the Rohingya
camps and maintaining law and order there,” she said.

Sheikh Hasina said the anti-liberation communal forces made sinister
attempts to destabilize the country in 2013, 2014 and 2015.

“They unleashed terror and ruined state properties through strikes,
blockades, violence, torching and killing of innocent people,” she said.

The premier added: “But police members prevented those subversive
activities with highest professionalism and managed to restore peace and
confidence in the society.”

Ministers, the premier’s advisers, secretaries to the PM and senior PMO officials were present on the occasion.
(BSS)