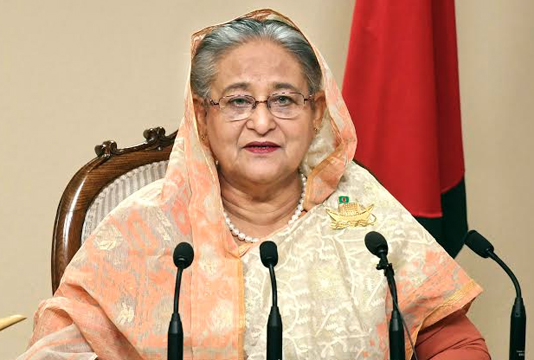 Following is the full text of the speech of Prime Minister Sheikh Hasina. Bismillahir Rahmanir Rahim Dear countrymen, Bangladesh Awami League formed government for the fourth term on January 7 last year in post-75 period after winning the 11th national parliamentary election held on December 30 in 2018 with a huge margin. Today I appeared before you on the completion of one year as I took oath for the fourth term as the Prime Minister. I have extended my heartfelt greetings to you all on the Christian New Year.

I am recalling with profound respect Father of the Nation and the greatest Bangalee of all times Bangabandhu Sheikh Mujibur Rahman on this auspicious occasion. I am recalling the four national leaders, 30 lakh martyrs and two lakh repressed mothers-sisters. I salute the freedom fighters.

I recall the people killed in the arson and petrol bomb attacks from 2013 to 2015. I express sympathy to families of the injured and the deceased.

I recall with profound honour the distinguished personalities, including politicians and public representatives, who passed away after formation of the government through the 11th parliamentary election.

The year of 2020 is especially important one in our national life. The birth centenary of the greatest Bangalee of all times, Father of the Nation Bangabandhu Sheikh Mujibur Rahman is going to be celebrated this year. The grand opening of the yearlong programmes will start from March 17 next. We have already declared 2020-2021 the “Mujib Year”.

The Father of the Nation had utilized his full strength to reorganise the war-ravaged country standing on the destroyed infrastructures and economy caused by the 24 years’ repression and the “scorched soil policy” of Pakistan during the Liberation War of 1971. He had reached Bangladesh to a dignified position in the world only within three and a half years. Bangladesh has been upgraded to a least developed country. But, the progress had been halted after the assassination of the Father of the Nation on August 15 in 1975.


Bangladesh became an undignified country due to isolation from the people, looting, and running of the state without having a philosophy by the governments after the 1975 (except the Awami League government). Bangladesh was known as a country of storm, tidal surge and beggars, poor and skinny people in the globe. We had taken the charge of running the government in 1996 after 21 years, when the poverty rate was 55 percent. We have taken some epoch-making initiatives during the tenure of 1996-2001. We had introduced various allowances for the poor and marginal people, special programmes such as Ashrayan Prokolpo, Ghore Fera and set up community clinics which have been playing special role in reducing poverty and improving the living standard of the poor and marginal people.

The country within a short span of time had achieved self-sufficiency in food production for taking up pro-farmer and agriculture friendly policy. Besides, we had taken short, mid and long term policies in different sectors with their far-reaching impact on the economy. When the country headed towards the highway of development after tackling the economic standstill, at that time the BNP-Jamaat came to power in 2001 through conspiracy. Repression and torture started on the leaders and activists of the Awami League under the patronisation of the government. Twenty-one thousand leaders and activists were murdered. Many ongoing development projects were stopped only for political reasons. With the opening of the “Hawa Bhaban”, the looting of state properties had continued freely. The military-controlled caretaker government of 2007 was the inevitable outcome of that obvious consequence. That government had kept me in jail without any cause.


We had taken the charge of running the state after taking huge mandate in the 9th parliamentary election in 2009. We had been able to add a new dimension to the economic advancement of Bangladesh after overcoming the financial and administrative indiscipline of two years of BNP-Jamaat and caretaker government as well as the global economic meltdown. As part of its continuation, Bangladesh has been established as a well-known country in the world in terms of socio-economic development. Bangladesh had achieved remarkable success in securing high growth rate in GDP and various social indexes. Bangladesh had been able to surpass

not only neighbouring countries in South Asia but also many developed countries in terms of poverty reduction, women empowerment, reduction of child and mother mortality rate, increase of education and life expectancy rate and in various indexes.
(BSS)