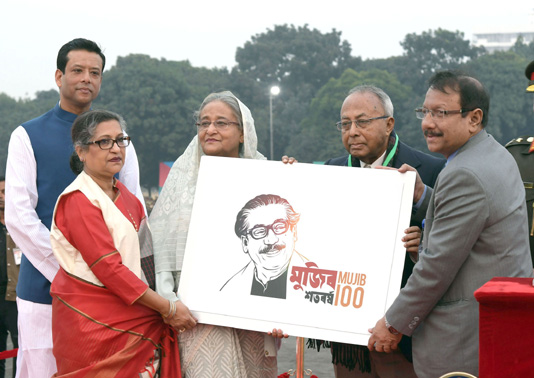 Prime Minister Sheikh Hasina today inaugurated the countdown for yearlong celebration of the “Mujib Year” marking the birth centenary of Father of the Nation Bangabandhu Sheikh Mujibur Rahman, coinciding with his 1972 return home from Pakistan captivity.

“I open the countdown,” she said at a grand ceremony at the Old Airport, the scene where Bangabandhu first touched the soil of his independent Bangladesh on his return home, celebrated as his historic Homecoming Day.

Accompanied by Bangabandhu’s younger daughter Sheikh Rehana and grandson Sajeeb Wazed Joy on the podium, Sheikh Hasina expected the people to put Bangladesh in a dignified position on the world stage by establishing “Sonar Bangladesh” as dreamt by the Father of the Nation. “He had handed over to us the victory torch and we want to move forward with it,” said the premier, Bangabandhu’s elder daughter.


Weeks after the December 16, 1971 Victory from the Pakistani occupation,
Bangabandhu landed at the then Dhaka International Airport at Tejgaon while a
British Royal Air Force aircraft, a C-130J jet, carried the country’s
founding father from London en-route New Delhi.

A recently procured British C-130J aircraft, identical to the jet carrying
Bangabandhu, was set on the airport’s tarmac while a laser light symbolized
Bangabandhu with a waving hand.

The light was slowly moved to the red carpet depicting Bangabandhu
descending from the aircraft amid a 21-gun salute, to be greeted with wreaths
in an effort to resemble the January 10, 1972 scene at the airport.

A contingent of army, navy and air force troops offered an honour guard in
line with the event on that day 48 years ago.

One hundred pigeons along with green and red balloons were released while
Shandhya Mukherjee’s “Bangabandhu feere ele tomar shopner swadhin banglaye”
was played ahead of landing of the aircraft.

“The nation was waiting with all their eagerness for the return of
Bangabandhu since the December 16 (1971) Victory,” the premier said
revisiting the memory lane.


She recalled that on that day, her mother, younger sister and she herself
were following the radio commentary on the historic event from their house as
they could not move to the scene with minor children, including her son Joy
and youngest brother Russell.

Sheikh Hasina termed the January 10 as a very important day of the nation
as “on that day we got back the great leader who sacrificed his entire life
(for the people), spent his valuable time of his life in jail for the cause
of the distressed people of Bangla”.

The premier said even the then Pakistan dictator general Ayub Khan, who
wanted to gag his voice, in his diary acknowledged in a different way
Bangabandhu’s belief that Bangladesh would eventually emerge as an
independent nation.

“He used to move raising his head high . . . he would utter ‘Joy Bangla’
slogan every time when he was taken to court (while in captivity in
Pakistan),” she quoting the general’s diary as saying.

“Bangabandhu completely dedicated his life to the people of the country
and his dream was that they can get food, clothing, education and better life
as well,” she said.

The prime minister said the people of Bangladesh jumped into the Liberation
War by chanting this slogan and they sacrificed their life unhesitatingly.


“We are unfortunate that whom the Pakistani occupation forces tried to kill
had to give his life within three and a half years of independence when he
was engaged in taking the war ravaged country towards development,” she said.

After the killing, the spirit and the history of the Liberation War were
erased and Bangabandhu’s March 7 speech and Joy Bangla slogan were banned.

The prime minister said the Father of the Nation used to deeply love the
people of the country and wanted them to get a beautiful life.

The Father of the Nation said in the speech that “Kabiguru” comes to see
that the seven crore people have become human beings and they secured victory
in the war.

“We want to move with the victory torch that the Father of the Nation
handed over to us. We want to build a hunger and poverty-free prosperous and
developed Bangladesh as dreamt by Bangabandhu and the country would advance
on the world stage by keeping its head high and with dignity,” she said.


The prime minister said: “In the middle, a black chapter had gone from our
life and we want that black chapter never to put shadow on our life and the
people of the country could place Bangladesh in a dignified position by
establishing Sonar Bangladesh”.

Noting that the birth centenary of the Father of the Nation Bangabandhu
Sheikh Mujibur Rahman is a historic moment, she said, “Through the
celebration, the limitless contribution and boundless courage of Bangabandhu
for the independence of the nation can be transcended from generation to
generation.”

Sheikh Hasina said the Father of the Nation proclaimed independence in the
first hour of the 26 March 1971. “Just after his declaration of independence,
he was arrested and subsequently sent to solitary confinement, and he was
subjected to inhuman torture in jail where he had been counting moments for
being executed after his death sentence was pronounced in a farcical trial,”
she said.

The premier said even learning that death is imminent, he rejoiced the
spirit of Bangalee nation. “Under his undisputed leadership and direction, we
achieved our independence on 16th December 1971 after the ninth month of
blood-shedding war of liberation,” she said.

Sheikh Hasina, the elder daughter of Bangabandhu said, though Bangladesh
achieved independence on December 16 in1971, the independence did not get
completeness unless his return home on January 10 in 1972.

The premier said she, her mother, sister Sheikh Rehana and little Joy were
detained and we got freed under the leadership of Indian Major Ashok Tara in
the morning of December 16. “We heard the Joy Bangla slogan and victory
jubilation from the prison and we also uttered Joy Bangla slogan from the
jail,” she said.

“After the release we had seen tears in the eyes of the people in one hand,
while smiles of the victory on the other hand and also waited eagerly when
their beloved leader will return (home),” she said.

When Bangabandhu returned home on January 10, lakhs of people welcomed him
at the airport, she said adding that the life of the people who lost their
near and dear ones in the Liberation War was made complete and they tried to
forget their pain through getting their beloved leader.


Sheikh Hasina said the defeated Pakistani rulers were compelled to free
Bangabandhu due to international pressure. “The Father of the Nation got
freed from the captivity of Pakistan on 8 January 1972 and was flown to
London and then returned to his motherland-independent Bangladesh and our
long cherished victory attained fulfillment,” she said.

“Bangabandhu was in the dark isolated prison for more than 13 years but
never compromised to his ideology and commitments and he brought our
independence following the path of honesty and truth,” the premier said.

Sheikh Hasina said the Father of the Nation made the clarion call on his
historic 7 March speech to the nation to take part in the Liberation Ear.
“His 7 March speech is now recognized as one of the most inspiring and
motivational speeches in the world in the history of two thousand and five
hundred years. The UNESCO has included this speech as a part of world’s
documentary heritage,” she said.

The prime minister thanked the friendly countries, including India, which
gave shelter to the refugees and imparted training to the freedom fighters
with arms and those extended support to Bangladesh in the United Nations.
“The people of almost all of the countries of the world stood beside the
freedom-loving people of Bangladesh at that time,” she said.

Sheikh Hasina specially thanked the National Implementation Committee for
the Celebration of the Birth Centenary of the Father of the Nation
Bangabandhu Sheikh Mujibur Rahman, the Armed Forces Division and law
enforcement agencies, ministries, divisions and other organizations for
smoothly completing the today’s arrangement at the memorable Tejgaon Old
Airport.


Dr Kamal Hossain, who accompanied Bangabandhu from Pakistan to Bangladesh,
and national Professor Anisuzzaman were present as witnesses to today’s
ceremony along with some 2,000 guests and another 10,000 spectators.

The United Nations Educational, Scientific and Cultural Organisation
(UNESCO) will also celebrate the Mujib Borsho along with Bangladesh in line
with the decision of its 40th General Assembly held at its headquarters in
Paris.

Awami League and its different wings have chalked out many programmes
across the country throughout the ‘Mujib Year’ along with the government
while the year-long event is expected to draw major world leaders and global
figures to Dhaka.

Several of them are expected to join the grand opening of the ‘Mujib Year’
in the capital on March 17, Bangabandhu’s birthday.


Bangladesh’s 77 missions abroad have taken 261 programmes, including
introduction of ‘Bangabandhu Chair’ in a number of universities abroad as
well as naming roads after Bangabandhu, foreign ministry officials said.

The government formed a National Committee and a National Implementation Committee to stage the Mujib Year events. The celebration committee selected over 299 proposals of programmes, piloted by people at home and abroad, which will be observed across the ‘Mujib Year’.
(BSS)