Bangladesh to take on Scotland tomorrow in U19 WC 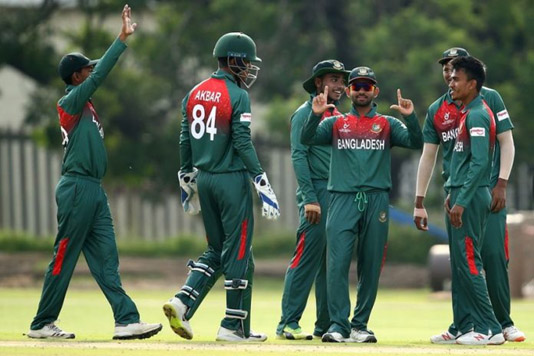 Bangladesh Under-19 team will have an eye to seal the Super League Quarterfinals of ICC Under-19 World Cup when they take on Scotland tomorrow (Tuesday) at the Potchefstroom in South Africa. The young Tigers began their campaign in perfect fashion, having crushed Zimbabwe by nine wickets through D/L method in a rain-curtailed match.

Another victory would help them take a giant stride towards the Super League Quarterfinal. While Bangladesh registered their first win in the first match, Scotland tasted a seven-wicket defeat against Pakistan.


Bangladesh’s victory came at ease against Zimbabwe who scored 137-6 in 28.1 overs before rain halted the game. After the rain allowed the game, Bangladesh’s revised target was set for 130 in 22 overs, which they comfortably gunned down, making 132 in just 11.2 overs.

Bangladesh will take on Pakistan in their last Group C game on January 24 at Senwes Park, Potchefstroom.


A total of 16 teams are playing in the U-19 World Cup splitting to four groups. Top two teams of each group will qualify to Super League quarterfinals while the bottom two teams will have to play in Plate quarter-finals.