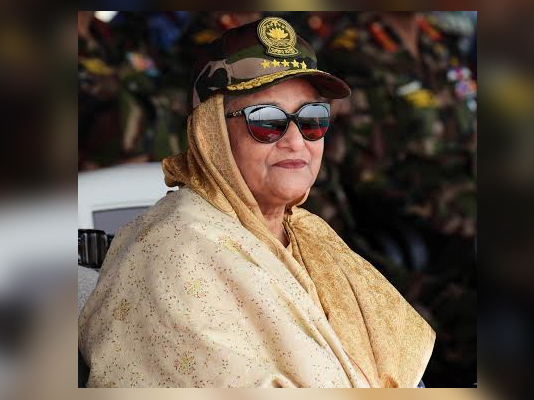 Addressing the ceremony as the chief guest, Sheikh Hasina said her government wants the people to remain in peace and safe and get a better and beautiful life. “We’re working to achieve the goal.” In this connection, Sheikh Hasina quoted the some portions of the speech of Bangabandhu at the first passing out parade of the military academy.


The prime minister mentioned that in the speech Bangabandhu had said: “We’ve brought independence in exchange for blood. This independence will certainly exist Insha Allah, none can destroy it. However, the independence will go in vain, if you can’t bring smiles on the faces of the distressed people. For this, it’s my appeal to you to remain on the honest way.” Sheikh Hasina, also the elder daughter of the Father of the Nation, said Bangabandhu had made the comments to the armed forces.

“But these words are not only applicable to the armed forces, those are also applicable to the entire nation,” she said. The 33 Infantry Division of Bangladesh Army hosted the lunch, where Army Chief General Aziz Ahmed delivered the welcome address. Earlier, the prime minister witnessed Bangladesh Army’s winter training exercise named “Operation Bijoy Gourab”.

The prime minister said her government is working to build modern, developed and well-equipped armed forces in the country so that they can move by keeping pace with the modern world. “A great task of protecting our independence and sovereignty has been vested in the armed forces. So, we’ve taken steps for modernising the armed forces and making them well-equipped in arms and ammunition and training so they can move in the world keeping their head high,” she said.


Sheikh Hasina pointed out that the members of Bangladesh’s armed forces are working in various UN missions to maintain peace in different trouble- torn areas. “Naturally they have to work with armed forces of other countries. So, we want they don’t lag behind (other armed forces) and they will be befitting to keep pace with the world on all sides, including training and arms and ammunition,” she said.

She went on saying: “To attain the target, we’ve taken many initiatives and implemented those (initiatives) … we’re working whatever possible (for modernising and development of the armed forces) despite our resource constraints.”

The prime minister said the armed forces are making massive contributions
to the country’s development alongside safeguarding its independence and
sovereignty.

“Our armed forces are also playing a commendable role in the
socioeconomic development in various trouble-torn countries side by side with
maintaining peace there,” she said.

Sheikh Hasina said her government immediately after assuming office took
steps to build modern technology-based armed forces. “Besides we’re building
Digital Bangladesh and we want no organisation to trail in this regard,” she
said.


Putting emphasis on imparting more training to the members of the armed
forces, the premier said training is inevitable for any force.

She said her government has allocated Swarna Dweep, formerly known as
“Jahaizzarchar” of Noakhali, so that the army could stage exercise and take
training throughout the year.

The prime minister said the name of Swarna Deep was Jahaizzarchar, which
was once under the occupation of the pirates. Various incidents like killings
and clashes frequently took place there at that time, she said.

“At that time I told the army that I want to give a big char land to you
and make arrangements for its development and exercise. Later, we handed over
the area to the army and also changed its name,” she said and thanked as well
as congratulated all concerned of the army, including the 33 and 66
divisions, to turn the island a truly Swarna Dweep.

Sheikh Hasina said her government is doing whatever necessary for the
development of the island and more development will be made there. “We’ll
make arrangements there so that the time of the training could be longer,”
she said.


“We attained self-reliance enough economically. We increased our budget
seven times. We’re implementing 90 percent development works by our own
funding … we don’t need to beg hands from others,” she said.

The prime minister said: “We’re a victorious nation as we secured victory
through the Liberation War … we’ll stand on our own feet and we think in
this way.”

Sheikh Hasina when Bangabandhu liberated the country, over 82 percent
people lived under the poverty level. “We’ve brought down the poverty rate to
20 percent and we hope that we could cut the rate by at least 1.5 or two
percent further in the Mujib Borsho,” she said.

The prime minister said her government has taken various programmes for
poverty alleviation and the army has adequate contributions to implementing
the programmes.

Sheikh Hasina said her government wants to build Bangladesh as an educated
nation. “To achieve the target, we’re distributing books among the students
free of cost and providing scholarships and stipends among two crore and
three lakh students,” she said.

The prime minister said: “We’re working keeping in mind that any part of
the society doesn’t lag behind and our all development works reach to the
rural people.”


Sheikh Hasina said Bangladesh is advancing and her government is making
this development as it is moving following the ideology of the Father of the
Nation.

“We want to keep up this advancement and we’re taking every step to achieve
the goal,” she said.

The premier congratulated members of the army, navy and air force for
presenting an excellent exercise today.

The prime minister witnessed the winter exercise as the chief guest at the
offshore island of Swarna Dweep in Noakhali’s Hatia upazila this morning.

The navy and air force units also joined the hour-long exercise as part of
demonstration of coordinated operations of the three armed forces.

Modern tanks, APCs, MiG fighter planes, MI helicopters, canons and other
war armaments of the three armed forces took part in the exercise where a
mock war was staged between the Bangladesh Armed Forces and the ‘enemy
force’.

The drill ended with the victory of the Bangladesh Armed Forces.

Brigade Commander of 222 Infantry Brigade Group Brigadier General Mahbub
informed the victory of the armed forces against the enemy force to the
premier.


Sheikh Hasina later congratulated the Bangladesh Armed Forces on their
victory against the ‘enemy force’.

Ministers, parliament members, the chiefs of the three armed services,
secretaries to the PM and high civil and military officials were present on
the occasion.

At that time, the prime minister gave various directives for the uplift of
the island.

The prime minister also inaugurated three multipurpose cyclone shelters, the planned afforestation project and one megawatt solar power plant constructed and implemented by the army at the island. She distributed winter clothes among the people of the island. The 33 Infantry Division arranged this programme.
(BSS)