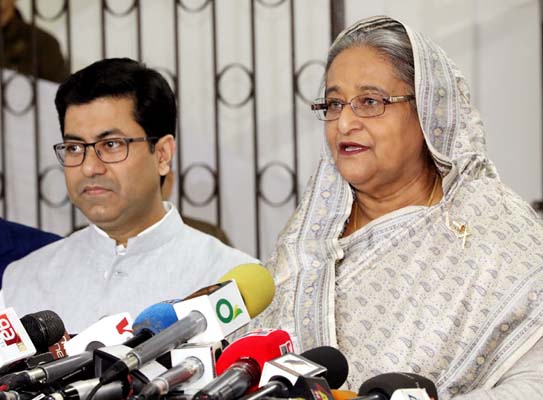 “I hope that our two mayor candidates in Dhaka city corporation elections — Fazley Noor Taposh and Atiqul Islam — will win in the polls. After winning the polls, we’ll build a developed and clean city for the dwellers of Dhaka city Insha Allah,” she said.

The prime minister expressed this optimism while talking to reporters after casting her vote at Dhaka College Centre here this morning.

“I cast my vote just this moment and in the mayoral post, I cast vote on
the boat, the election symbol of Awami League, and in the councillor posts, I
gave vote to (Rafiqul Islam) Babla and Shirin (Gaffar),” she said.


“I hope that the people of Dhaka city will make victorious Awami League
(AL)-nominated candidates by casting vote on boat to accelerate the
development of the city further and complete its various uplift programmes
smoothly,” she added.

Pointing out her government’s various programmes taken for the development
of Dhaka city, Sheikh Hasina said: “We can implement these programmes after
winning in the elections.”

The prime minister cast her vote through electronic voting machine (EVM)
method at Dhaka City College centre at Dhanmondi at 8 am.

Earlier, the prime minister arrived at the Dhaka City College centre
arround 7:55 am and later went to the room No. 241 on the second floor of the
centre where she cast her vote as the first voter.

Mentioning that casting vote is the rights of the people and it is their
constitutional rights, she said, “All arrangements have been made so that the
people exercise their franchise smoothly.”


In this connection, she said starting from the law enforcement agencies
all who are involved in the polling are working very sincerely to this end.

“I would like to urge the people of Dhaka to cast their vote by maintaining
discipline,” she said.

The premier went on saying: “Amar vote ami debo, jake amar pachhondo takedebo” (I will cast my vote and give my vote to whom those I like) and it willgo on during this rule and the elections will be held in this way.”
Sheikh Hasina said the people will cast vote freely as per their wish and
through this vote, they will make their candidates victorious.

The prime minister mentioned that she cast her vote through the electronic
voting machine very easily. “I could give my vote within very short time and
very easily,” she said.


Sheikh Hasina hoped that the Election Commission would make arrangements
for casting vote in this digital system in the entire country so that the
voting rights of the people are ensured and none can snatch their this
rights.

The prime minister simultaneously asked the law enforcement agencies to
remain alert so that every voter can cast vote to his/her candidates
peacefully and as per his/her choice.

“We want to create such an environment so that every voter can exercise
his/her franchise properly,” she said.

Sheikh Hasina said: “We’ve established democracy and democratic rights (of the people) through many struggles and movements. As a result, the country is advancing towards the highway of development and prosperity.” “We’ll build hunger and poverty-free Sonar Bangla as dreamt by Bangabandhu Insha Allah,” she said.
(BSS)