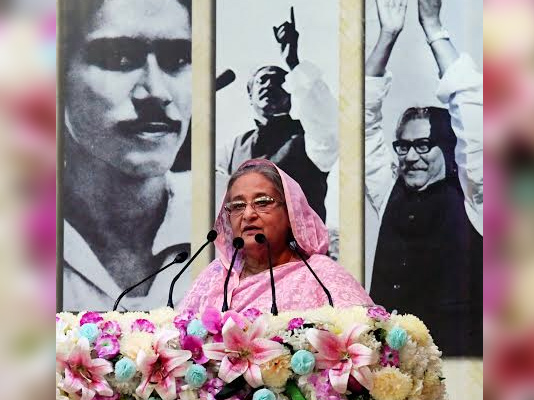 “Not only in our country, we also want to reach our art, culture and literature onto the world stage by improving their quality further,” she told the opening ceremony of the book fair on Bangla Acdemy premises here this afternoon.

Addressing the function as the chief guest, Sheikh Hasina also put emphasis on more translation of Bangla literature and said: “We want the people of different languages of the world to know our rich literature and culture.”

In this connection, she said the Bangla Academy has taken adequate initiatives to this end.

State Minister for Cultural Affairs KM Khalid was present as the special guest, while National Professor Dr Anisuzzamanin presided over the event.

This year Bangla Academy has set the theme of the fair as “Birth Centenary of Bangabandhu” by dedicating the fair to the iconic leader, marking his birth centenary.

At the outset of the function, a minute’s silence was observed by showing profound respect to the memories of the Language Movement martyrs.

After inaugurating the fair, the prime minister visited different stalls of the fair.

The prime minister said this book fair is now not only a centre of selling and purchasing of books, it is also a fair of the hearts of the Bangalees.

“On the occasion of the book fair, the Bangalees living in different parts of the world come home and foreign nationals also visit Bangladesh to witness the unprecedented love of the Bangalees for books,” she said.

Sheikh Hasina mentioned that she had spent hours after hours at the book fair during her student life. “But now I don’t have that freedom as I’m in charge of the prime minister,” she said.

The prime minister thanked the Bangla Academy for giving her an opportunity to come to the academy on the occasion of the book fair.

Pointing out Bangladesh’s rapid development, she said: “We’re moving fast and we got recognition in the world as the Bangalee nation.”


She went on saying: “We want to advance the country further to earn honour in the world as a dignified state.”

The prime minister said now none can see Bangladesh in the eyes of neglect as her government is running the state very efficiently for the last 10 years.

“It’s not acceptable to us that anybody will undermine Bangladesh which earned independence in exchange for blood,” she said.

“We’re a victorious nation and we want to move by holding our head high and with the spirit of the victory … we want to build a hunger- and-poverty-free Sonar Bangla as dreamt by Bangabandhu,” she added.

The prime minister highlighted Bangabandhu’s contributions to the language movement and projecting Bangla language on the world stage.

She mentioned that Awami League government coming to power in 1956 declared Ekushey February as “Shaheed Dibash” and constructed Shaheed Minar officially along with giving Bangla the status of official language.

Sheikh Hasina said Bangabandhu had to suffer imprisonment for participating in the language movement, realising the demands of the class four employees of Dhaka University and the demand for food by the hungry people of Bangla.

The prime minister quoting Bangabandhu’s book titled “Amar Dekha Naya Chin” (The New China as I Saw) said that the Father of the Nation for the first time delivered his speech in Bangla in the conference.


In the book, she said, the Father of the Nation also narrated the socioeconomic condition of the people, including farmers, workers, students even the children of new China.

‘Bangabandhu visited China not only as a tourist, he also witnessed various issues. We got him as a tourist, observer and also a critic in the book,” she said.

The prime minister said Bangabandhu paid the visit to China after being jailed for two and a half years by the Pakistani rulers.

Sheikh Hasina said Bangabandhu as a political leader closely witnessed the change of the development of China and he also highlighted the bad state of the people of Purba Bangla.

The prime minister said the Father of the Nation went abroad at that time just after being tortured by the Pakistani rulers.

“But we see in our country that many people while going to complain to the foreigners tell them more that doesn’t happen after being encouraged further … we see this trend (among some people),” she said.


The prime minister said that the people could feel good and know about many things on new China if they read book “Amar Dekha Naya Chin”.

Sheikh Hasina said after visiting China, whatever predictions Bangabandhu made about China, today’s China has reached that position gradually.

The prime minister thanked poet Tariq Sujat for his help in publishing the book as he collected photos, monogram and information of the peace conference.

Sheikh Hasina also pointed out strides of her government as well as some Canada expatriate Bangladeshis in getting the recognition of the 21st February as the International Mother Language Day.

Due to efforts of Canada expatriates late Rafiqul Islam and Abdus Salam and sincere efforts of the Awami League government, she said, the UNESCO on November 17 in 1999 recognized 21st February as the International Mother Language Day.

The prime minister greeted all, including Bangla Academy and local and foreign publishers, involved in arranging the ‘Amar Ekushey Book Fair’.


Sheikh Hasina said Bangla Academy was established on December 3 in 1955 following the path the Language Movement.

She said the Ekushey Book Fair has been expanded up to historic Suhrawardi Udyan that bears the memories of the Language Movement, the Liberation War and Father of the Nation Bangabandhu Sheikh Mujibur Rahman.

Bangla Academy sources said this year the land earmarked for the fair has been expanded to 8,00,000 square feet. A total of 873 units were allocated to 560 organisations.