No panic, no rumour, says Chinese envoy about coronavirus 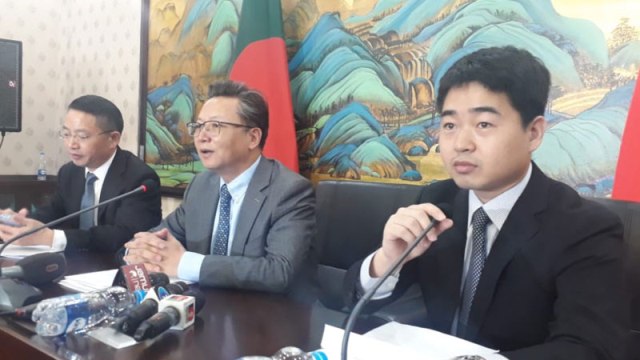 Online Desk : Chinese Ambassador to Bangladesh Li Jiming on Thursday urged all to remain alert instead of creating panic and spreading rumours noting that no Chinese national here and no Bangladesh national in China is infected with coronavirus.

The Chinese Ambassador also expressed displeasure for what he said overreaction from countries like the USA and Australia to the situation.

“Let general people be alert but don’t create panic. No panic, no rumour, and be rational,” Ambassador Li Jiming told reporters at the Embassy adding that there is no need for “overreaction” to the situation.

Deputy Chief of Mission and Minister (Counselor) of the Embassy Yan Hualong, was, among others, present.


He said no-one of them in Chinese Embassy and no Chinese national working in Bangladesh development projects is infected by the coronavirus. At the same time, he said, no Bangladesh citizen living in entire China is infected.

The Chinese citizens who are working in Bangladesh have been advised not to travel to China until the situation improves and at the same time, the Chinese companies in Bangladesh will avoid hiring fresh employees from China until the situation improves, according to the government directives.Ambassador Jiming said the current situation over coronavirus outbreak will not prolong as they are fully capable, confident and resourceful to overcome any difficulty curbing the epidemic at the shortest time of period.

He said around 8,000 Chinese nationals, including engineers and technicians, have been working in Bangladesh in various projects, and two third of them have gone to China because of holiday and family reunion.

The Ambassador reassured all of the public health security of their people and the world at large.

Asked whether there will be any negative impact on bilateral trade relations, Yan reassured and said cargoes (carrying goods) do not carry coronavirus.

Ambassador Jiming said they will not forget that the SARS epidemic raged in 2003, but they survived it and came out with a strengthened health system and booming national development.

“I firmly believe, with the strong leadership of the Central Committee of the Communist Party of China with Comrade Xi Jinping as its core, the strength of the socialist system with Chinese characteristics, the firm determination of our people to fight the epidemic, the unwavering support of the international community, and the experience of the past,” he said.The Ambassador hoped that the people from all walks of life in Bangladesh, especially friends from the media, will not create panic but calmly and rationally evaluate the risk, follow the guidance of health professional authorities, such as WHO, avoid overreaction and not follow the rumors.


“There’s a saying in China which goes that “the rumour ends with the wise”. I believe the people of Bangladesh are the wise,” he said.

With China’s unrelenting efforts, he said, the Novel Coronavirus mortality rate in China is about 2.1 percent, much lower than the figures above.

“Since February 1, cured cases began to outnumber deaths. We’ve the confidence and the capability to win this battle,” the Ambassador added.As of now, 25 countries have reported confirmed cases of the new coronavirus, including China, where 24,363 people had contracted the virus, or over 99 percent of all cases, according to WHO. In all other countries, 191 cases have contracted the virus.

To fight further spread of the new coronavirus (2019-nCoV) outbreak in China and globally, and protect states with weaker health systems, the international community has launched a US$675 million preparedness and response plan covering the months of February through to April 2020.

“My biggest worry is there’re countries today who don’t have the systems in place to detect people who have contracted with the virus, even if it were to emerge,” said Dr Tedros Adhanom Ghebreyesus, WHO Director-General.

“Urgent support is needed to bolster weak health systems to detect, diagnose and care for people with the virus, to prevent further human to human transmission and protect health workers.”

The Strategic Preparedness and Response Plan (SPRP) for the new coronavirus lays out activities and resources needed by international health organisations globally, including WHO, to implement priority public health measures in support of countries to prepare and respond to nCoV-2019 for a period of February-April 2020.


The objectives of the plan are to limit human-to-human transmission of the virus, particularly in countries most vulnerable if they were to face an outbreak; identify, isolate and care for patients early; communicate critical risk and event information; minimize social and economic impact; reduce virus spread from animal sources; and address crucial unknowns.