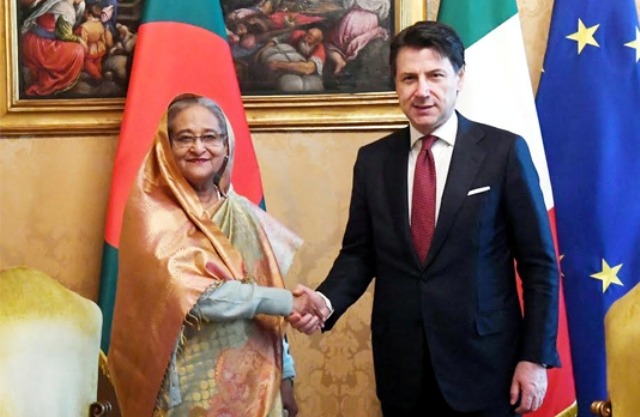 “The Bangladesh prime minister also expressed thanks to the EU including Italy for their support to the cause of the Rohingyas,” said a nine-point joint statement issued on the outcomes of bilateral talks between Bangladesh Prime Minister Sheikh Hasina and her Italian counterpart Giuseppe Conte here on Wednesday.
The talks were held at Palazzo Chigi, the official residence of the Italian prime minister, where the two leaders discussed the entire gamut of bilateral relations and expressed satisfaction at the present state of economic cooperation between the two countries, PM’s Press Secretary Ihsanul Karim told reporters earlier.


The statement said both sides welcomed the International Court of Justice’s January 23 decision on the Rohingya crisis.

It said the Bangladesh premier called for international community’s support in implementing the decision of International Court of Justice.

Conte expressed Italy’s appreciation for the Bangladeshi management of the Rohingya crisis.

He underlined the political and financial support Italy has been delivering through UN agencies to help Bangladesh cope with the humanitarian emergency and encouraged Prime Minister Sheikh Hasina to continue with the policy of hospitality Bangladesh has followed so far.

The statement said the bilateral talks between the two prime ministers, which took place on February 5, reflected the positive trend of bilateral relations.


“Both sides stressed the importance of an ever more intense cooperation between the EU and Bangladesh in areas such as development, labor and human rights,” it said.

The two leaders acknowledged the importance of the “Everything But Arms” preferential tariff regime the EU has been allowing for Bangladeshi exports towards the European market.

They acknowledged the positive development of bilateral trade exchanges, the statement said, adding that the figures of the last few years show an overall increase of exchanges, firmly over 2 billion Euros.

The Italian premier recognized the socioeconomic progress Bangladesh has made, which aims at bringing the country out of the Least Developed Countries (LDCs) group in 2024.

“Both sides praised the presence of Italian companies in Bangladesh, including the textile sector,” the statement said.

The two leaders, it said, expressed their confidence in further consolidating the Italian-Bangladeshi economic partnership, including in the sectors of readymade garments, pharmaceutical products, light engineering, leather, hi-tech and both conventional and renewable energy.


The sector of blue economy was also indicated as an area of mutual interest, also in connection with Italy’s outreach activities towards the Indian Ocean Rim Association (IORA).

The statement said both leaders recalled the presence of a large Bangladeshi community in Italy, more than 140 thousand people, mostly well integrated in the Italian social fabric.

“A substantial part of the talks was focused on the ways and means to further consolidate bilateral cooperation on the issue of migration,” it said.

The two prime ministers talked about possible legal pathways for regular migration and fighting against the irregular one.
They commended the very positive degree of cooperation existing between Italy and Bangladesh within the UN system, where both countries remain traditionally supportive of each other’s candidatures.

The statement said Bangladesh has sought Italy’s support in preferential access of its commodities to EU market even after the country’s graduation out of the Least Developed Country (LDC) group status.

“Both sides also agreed to intensify consultations,” the statement added.


The two leaders pointed out the importance of the golden jubilee of the establishment of diplomatic relations between Italy and Bangladesh that will take place in 2022.

They convened to celebrate the event through a series of cultural events in both capitals, under the aegis of the respective embassies.

Prime Minister Sheikh Hasina invited the Italian premier to visit Bangladesh for participating in the celebration of Mujib Borsho.

Conte warmly thanked her for the invitation, the statement said.