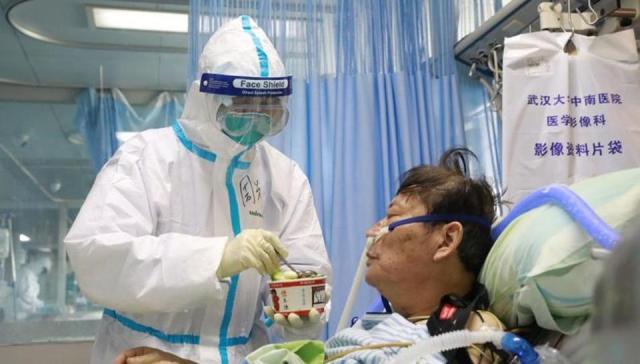 International Desk : The death toll from the novel coronavirus surged past 800 in mainland China on Sunday, overtaking global fatalities in the 2002-03 SARS epidemic, even as the World Health Organization said the outbreak appeared to be “stabilising”.

With 89 more people dying — most in Hubei, the province at the centre of the outbreak — the toll is now higher than the 774 killed worldwide by Severe Acute Respiratory Syndrome nearly two decades ago, according to figures from national health authorities.

The latest data came after the WHO said the last four days had seen “some stabilising” in Hubei but warned it was “very early to make any predictions” and the figures can still “shoot up”.


Almost 37,200 people in China have now been infected by the new coronavirus, believed to have emerged late last year in a market that sold wild animals in Hubei’s capital Wuhan, before spreading across the nation and to other countries.

The epidemic has prompted the government to lock down whole cities as anger mounts over its handling of the crisis, especially after a whistleblowing doctor fell victim to the virus.

With much of the country still not back at work after an extended Lunar New Year holiday, cities including Shanghai have ordered residents to wear masks in public, and many regions far from Hubei are allowing only one person per household to go out every two days to buy supplies.

Michael Ryan, head of the WHO’s Health Emergencies Programme, said the “stable period” of the outbreak “may reflect the impact of the control measures that have been put in place”.


The first foreign victim in China was confirmed this week when a 60-year-old American diagnosed with the virus died on Thursday in Wuhan, according to the US embassy.

A Japanese man in his 60s with a suspected coronavirus infection also died in a hospital in the city.

The only fatalities outside the mainland have been a Chinese man in the Philippines and a 39-year-old man in Hong Kong.

The new virus is from the same family of coronaviruses as SARS although the mortality rate is lower.

According to official figures, around 2,650 people have been cured and discharged around the country — 600 more of them on Saturday.

China drew international condemnation for covering up cases in the SARS outbreak whereas the measures it has taken this time have been praised by the WHO.

But anger over Beijing’s approach erupted on social media this week after the death of a Wuhan doctor who police silenced when he raised the alarm about the threat of an emerging virus like SARS in December.

Li Wenliang was working as an ophthalmologist in Wuhan when he observed patients with symptoms similar to those of the deadly SARS pathogen.

The doctor, 34, died early Friday, Wuhan Central Hospital said in a post on China’s Twitter-like Weibo platform, after contracting the virus while treating a patient.

The government responded by sending its anti-graft body to launch an investigation.

In Hong Kong, China’s semi-autonomous southern financial hub where 299 people were killed by SARS, authorities on Saturday imposed a quarantine on people travelling from the mainland.

The city, with 26 confirmed cases, has been hit by a wave of panic-buying.

Similar scenes played out in Singapore as shoppers cleared grocery store shelves after the city-state, which has 33 confirmed cases, raised its alert level over the virus.

WHO chief Tedros Adhanom Ghebreyesus warned against misinformation, saying it made the work of healthcare staff harder.

“We’re not just battling the virus, we’re also battling the trolls and conspiracy theorists that push misinformation and undermine the outbreak response,” he said.

Hungarian police said Saturday they had busted a network of “fake news” websites that reported alleged coronavirus-related deaths in the country, which is so far free of cases.

Fearing the virus could cause an economic slowdown in China — the world’s leading oil importer and consumer — a committee appointed by the OPEC club of petroleum-producing countries has recommended cuts in oil output.

New cases have emerged abroad, with five British nationals, including a child, testing positive after staying at the same ski chalet in France.

Sixty-four people on board the Diamond Princess off Japan’s coast have tested positive and the ship’s passengers have been asked to stay inside their cabins to prevent new infections.
(AFP)