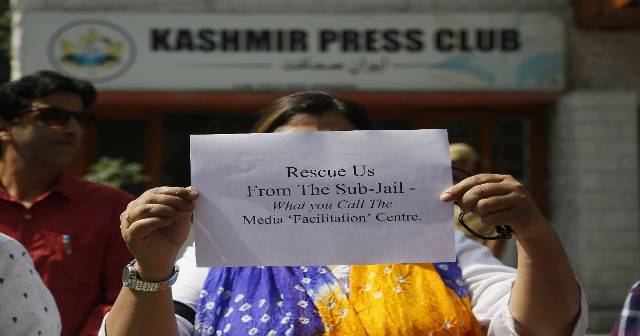 Online Desk : Journalists in disputed Kashmir urged the Indian government on Monday to allow them to report freely and expressed concern about alleged police harassment since the region’s semi-autonomy was rescinded in August amid an unprecedented lockdown.

The Kashmir Press Club, an elected body of journalists in the region, said security agencies were using physical attacks, threats and summons to intimidate journalists. The group said the government should “ensure freedom of speech and expression as guaranteed in the constitution instead of muzzling the press.”


On Saturday, police summoned two journalists for questioning in Srinagar for reporting about a strike call issued by the pro-independence Jammu-Kashmir Liberation Front. The Kashmir Press Club denounced the police action.

“The harassment and questioning of journalists in Kashmir on flimsy grounds” by the police is “a damning verdict on the appalling condition in which media is operating,” the group said in a statement.

It also criticized restrictions on the internet and surveillance by police, calling them “tools designed and aimed to ensure only the government-promoted version is heard.”

India’s decision to strip the region of its special status in August brought journalism to a near halt in Kashmir. A communications shutdown affected media operations, and most newspapers published in Srinagar, the region’s main city, have been unable to issue online editions.


Foreign journalists have been denied permission to visit the Himalayan region.

India is ranked 140th out of 180 countries in the World Press Freedom Index published by Reporters Without Borders, a global media watchdog.

The conflict over Kashmir began in the late 1940s, when India and Pakistan won independence from the British empire and began fighting over their rival claims to the region.


Since 1989, a full-blown armed rebellion has raged in the Indian-controlled portion seeking a united Kashmir — either under Pakistani rule or independent of both countries. India accuses Pakistan of training and arming the rebels, a charge Islamabad denies.

About 70,000 people have been killed in the uprising and an Indian military crackdown.