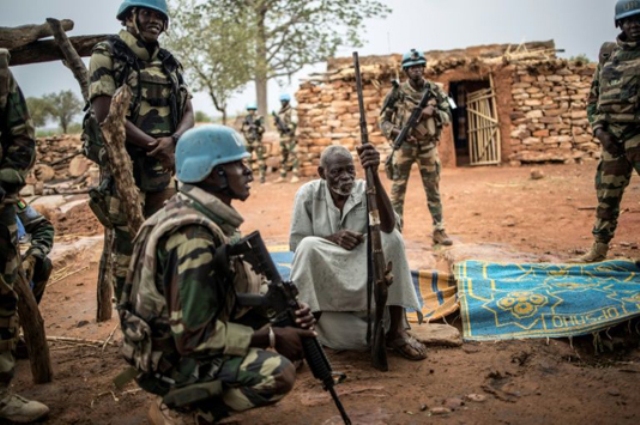 International Desk : Forty people, including nine soldiers, have been killed in a spate of attacks in central Mali, authorities said Friday, with most of the deaths caused by inter-ethnic violence in the deeply troubled region.

Thirty-one people were killed in an attack overnight in Ogossagou, a village mainly inhabited by Fulani people where 160 died last March in a massacre blamed on Dogon militiamen, the government said, raising the death toll.

“Huts and crops were set alight, livestock was burned or taken away,” he added, vowing that the government would find the perpetrators.


A local government official, who requested anonymity, had earlier said that 28 people were missing.

He blamed the attack on a Dogon hunters’ group — an assertion that could be not be verified independently.

The official and village chief Aly Ousmane Barry both said the attackers moved in several hours after government troops had pulled out of the area.

Later Friday eight Mali soldiers were killed and four others injured in an ambush in the central Gao region, the army said.

The Malian force also suffered “material damage,” the military said on social media sites, without indicating who had carried out the attack in the village of Bentia.

Also on Friday a soldier was killed in an attack on a military camp in Mondoro, also in central Mali, security officials said.

The camp had already been hit before — as part of a joint raid by militants that also targeted the military camp of Boulkessy near the border with Burkina Faso, killing at least 25 soldiers.

Central Mali became gripped by ethnic violence after a jihadist revolt broke out in the north of the country in 2012.

The insurgency has claimed thousands of lives and spread to neighbouring Niger and Burkina Faso.

Led by a firebrand Islamic preacher Amadou Koufa, a militia called the Katiba Macina recruited members from among the Fulani and has been accused of ethnically-motivated attacks.

Other ethnic groups such as the Bambara or the Dogon began to form self-defence groups that have been accused of reprisal massacres.

In addition to the latest attack at Ogossagou, 14 Fulani were killed in central Mali in January.

Around 75 Dogons were killed in the villages of Sobane Da, Gangafani and Yoro in June last year, in an attack blamed on Fulani militants.

Human Rights Watch this month pointed to the ethnic patchwork of central Mali as the country’s “epicentre” of violence.

It said over 450 civilians had been killed in the region in 2019, “the deadliest year for civilians” since the jihadist insurgency began.

Reflecting the chronic instability, Malian soldiers are themselves frequently targeted.

The violence in central Mali coincides with renewed hopes that the fragile government can reassert control over the largely lawless north.

Troops returned on Thursday to Kidal, a northern town that had been a bastion of Tuareg rebels, after a six-year absence.

Regular forces returned to the town accompanied by former rebels who have been integrated into the army under a regional peace agreement.

The deal, reached in Algiers in 2015, is considered one of the few avenues Mali has for escaping the cycle of violence.