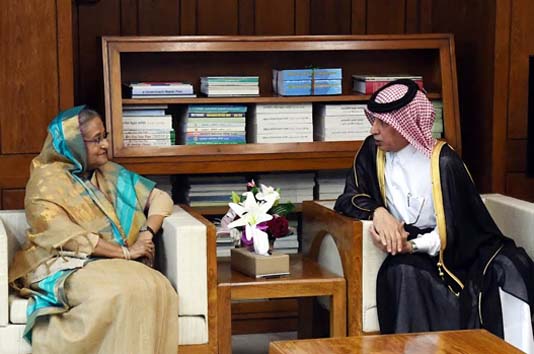 “We want to recruit skilled manpower like doctors, engineers and others from Bangladesh,” PM’s Press Secretary Ihsanul Karim quoted the Qatari state minister as saying while briefing reporters after the meeting at the premier’s Jatiya Sangsad office here this evening.

On the Rohingya issue, the Qatari state minister said his country will continue support to Bangladesh on this issue.


In this connection, the prime minister described again the Rohingyas as a ‘burden’ for Bangladesh’s economy.

“They (Rohingyas) are a burden of our economy and how long we’ll keep this huge number of Myanmar citizens in our country?” she questioned.

Sheikh Hasina said Myanmar agreed to take back its nationals from Bangladesh, but it didn’t act accordingly.

The press secretary said Saad Al-Muraikhi put emphasis on strengthening cooperation in different fields including education between the two countries.

“There are many unexplored areas which will have to be explored for economic cooperation,” he said.

Welcoming the Qatari state minister in Bangladesh, the prime minister said, “We give importance to our relations with the Muslim countries and together we can explore the areas for development.”

The prime minister sought more Qatari investment in Bangladesh for mutual benefits of the two countries.

“We’re setting up 100 special economic zones across the country and Qatari entrepreneurs can invest in these zones,” she said.

Mentioning that education is the key to development, Sheikh Hasina said her government has taken many steps for development of the education sector.

‘We’re giving emphasis to technical and vocational training for creating a skilled workforce in the country,” she said.


Highlighting her government’s measures for establishing a poverty-free country, the prime minister said her government has brought down the poverty rate to 20:5 percent.

While talking about the country’s socioeconomic development, the prime minister said GDP growth rate has increased to 8:15 percent due to various pragmatic steps of the government.

Sheikh Hasina invited the Qatari Emir to visit Bangladesh in the “Mujib Borsho”, saying that “We’ll be happy to receive him during the birth centenary celebration of the Father of Nation.”

“We’re following the implementation of your development programmes,” he told the premier.

Saad Al-Muraikhi also praised Bangladesh’s graduation to a developing country from a least developed one under the dynamic leadership of Prime Minister Sheikh Hasina.

The Qatari state minister said they want Bangladesh to play a major role in the region and the Muslim world.


In this context, he said: “We don’t want others to interfere in our internal affairs and you’re the symbol of the Muslim world in this regard.”

Earlier, Nepalese Ambassador to Bangladesh Banshidar Mishra paid a courtesy call on the premier at the same place, the press secretary said.
(BSS)