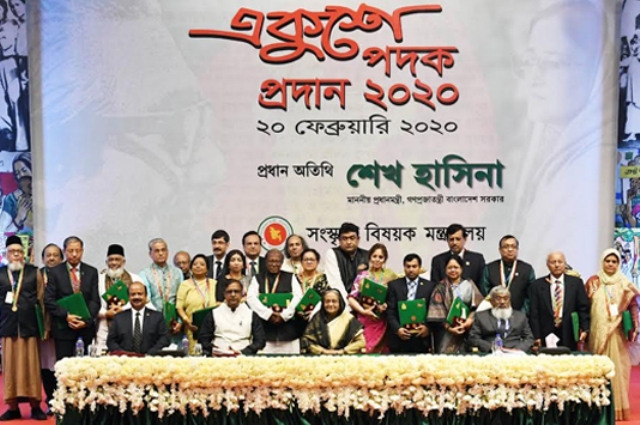 Online Desk : Prime Minister Sheikh Hasina today stressed the need for upholding the dignity of mother language and spreading the country’s literature and culture across the globe massively.

“The world cannot advance with only a single country…it has to move with all nations of the globe. So there is a necessity to learn other languages. But it’s not proper at all to forget our own language,” she said.

Sheikh Hasina added that many people of the country have to stay abroad incidentally. “Then we’ve to always give proper dignity to our own language,” she said.

The premier said this while handing over the prestigious “Ekushey Padak-2020” as the chief guest at a function at Osmani Memorial Auditorium in the capital this morning.

At the function, she distributed the Ekushey Padak, the second highest civilian award in Bangladesh, among 20 eminent persons and an organisation for their outstanding contributions to their respective fields.

The prime minister said: “We’re Bangalees and we want the practice of our culture to continue. So a special attention will have to be given so that our literature and culture could be spread further at the international level.”
Quoting a verse of a poem of Poet Michael Madhusudan Dutta in which he wrote – “Bine swadeshi bhasha, mite ki asha?” the prime minister said the celebrated poet wanted to write poems in foreign languages and he also tried
to write it and become a ‘saheb’ (sir) by moving abroad.

“But at one stage, the poet realised that satisfaction is not gotten after becoming a ‘saheb’ and later he returned to mother land,” she said.


In her speech, Sheikh Hasina also renewed her vow to build Bangladesh as a self-dignified nation in the world by making the country’s independence meaningful and sought cooperation of all in this regard.

“Bangladesh is our mother land and we want to build it beautifully and also want that none can undermine the country while hearing its name, rather they see Bangladesh with honour,” she said.

The premier went on saying: “We want to build Bangladesh as a self-dignified nation in the world by materialising Bangabandhu’s dream of establishing a hunger and poverty-free prosperous and developed country.”

Sheikh Hasina said: “We want to build Bangladesh in the spirit of the liberation war and make our independence meaningful and we’re working tirelessly to achieve the goal.”

“We’ve always to keep in mind that we earned independence in exchange of blood of three million martyrs,” she said.

Recalling Bangabandhu’s great sacrifice for the nation, the prime minister said the Father of the Nation dedicated his entire life to the welfare of the country and its people.

“Bangabandhu wanted to bring smiles on the faces of the distressed people by sacrificing all happiness of his life and our aim is to fulfill his that dream,” she said.

Pointing out Bangladesh’s tremendous development in the last one decade, Sheikh Hasina said the country is progressing at irresistible pace now. “We want this pace to continue,” she said.

“Massive development took place in the country in the last one decade … we want to develop it further and we’re advancing towards our goal by overcoming many obstacles,” she said.

The prime minister said her government has taken various far-reaching plans to build Bangladesh as the most developed and prosperous nation in South Asia.


“We want the generations after generations to enjoy the fruits of our plans and build their life beautifully,” she said.Remembering the glorious history of the Language Movement, the prime
minister said: “In fact immortal Ekushey has taught us sense of self-dignity
and not to bow down the heads.”

Putting emphasis on teaching that history to generations after generations,
Sheikh Hasina said the day is very important for the nation as independence
of the country was written by the letters of its (Ekushey) blood.

Sheikh Hasina said the immortal Ekushey is a bright and great chapter of
the thousand year’s history of Bangalee’s glorious struggles.

“Such sacrifice of the patriot Bangalee for establishing the dignity and
honor of the mother tongue is quite rare in the world history,” she said,
adding the glorious history should be reached to the new generations.

Pointing out Bangabandhu’s great role in the Language Movement, the premier
said there was an ill attempt in the past to deny the role of the Father of
the Nation in the movement.


She said the two books — The Unfinished Memoirs of Bangabandhu and the
Secret Documents of the Intelligence Branch on Father of the Nation
Bangabandhu Sheikh Mujibur Rahman — have solved all those confusions.

“The people could know many unknown facts of Bangabandhu’s struggles for
the mother language and independence through the two books,” she said.

Referring to her government’s steps working for upholding the dignity of
mother language, Sheikh Hasina said her government is working relentlessly to
ensure the use of Bangla at all levels and sectors of Bangladesh.

“We’re also working for proper preservations of the mother languages of
various ethnic minorities,” she said.

The premier said the Ekushey February was recognized as the International
Mother Language Day by UNESCO on 17 November 1999 with the initiatives of
late Rafiqul Islam, Abdus Salam and other expatriate Bangladeshis and the
efforts of the then Awami League government.

“We’ve established International Mother Language Institute where there are
scopes for conducting researches on the origin and development of all the
languages of the world and for preserving them”.

At the outset of her speech, Sheikh Hasina paid tributes to the Language
Movement martyrs for their great sacrifice in establishing the rights of the
mother language.


Secretary of the ministry Dr Abu Hena Mostafa Kamal delivered the welcome
address, while Cabinet Secretary Khandaker Anwarul Islam conducted the award-
giving ceremony and read out the citations of the awardees.