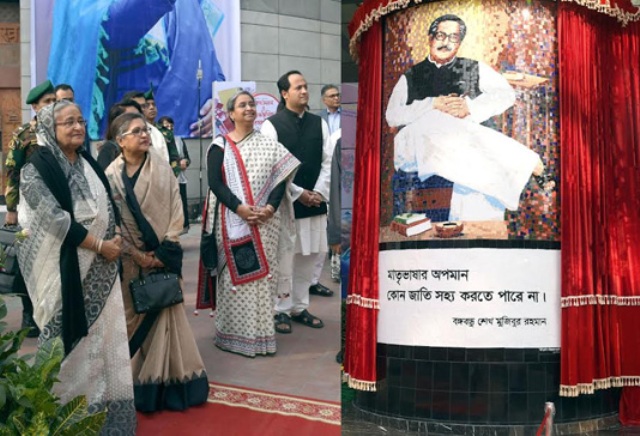 Online Desk : Putting emphasis on practicing Bangla language properly, Prime Minister Sheikh Hasina today castigated those, who speak Bangla in English accent.
“There is nothing to do except showing compassion for those, who staying on the soil of Bangladesh, cannot speak Bangla and who try to speak our mother language in English accent,” she said.

The prime minister said there are some boys and girls in the country, who try to speak Bangla in English accent, forgetting Bangla and languages of their own areas.

“It seems from their attitude that they feel very uneasy to speak Bangla,” she added.


Sheikh Hasina said the world is now a global village where everybody needs to learn other languages but the mother tongue must never be neglected.

“To live here, to communicate with others, doing business, knowing about other cultures and literature, one needs to learn different languages but not by excluding the mother tongue,” she said.

Presided over by Education Minister Dr Dipu Moni, the function was also addressed by Deputy Minister for Education Barrister Mohibul Hasan Chowdhury Nowfel and Head of the Office and UNESCO Representative to Bangladesh Beatrice Kaldun as the special guests.

Secretary of the Secondary and Higher Education Division under the Education Ministry Md Mahboob Hossain delivered the welcome address, while Director General of the International Mother Language Institute Professor Dr. Jinnat Imtiaz Ali gave the vote of thanks.

Referring to a comment of Professor Pabitra Sarkar, who presented the keynote speech at the function, the prime minister said: “The noted Indian educationist made a true remark that narrow mindness works among us while practicing our own language.”


Sheikh Hasina said there are some people who think that their children will not get job or cannot move in the society if they (children) do not study in English medium. “There is no doubt that they (those people) are suffering from mental poorness,” she said.

In this connection, the prime minister said she and her younger sister had to lead a refugee life abroad after the assassination of Father of the Nation Bangabandhu Sheikh Mujibur Rahman in 1975.

“We had not that fortune that from the beginning we will provide education to our children in Bangla medium, rather we had to get admitted them to foreign schools and foreign soil,” she said.

Sheikh Hasina went on saying: “On the foreign soil we always tried to teach our children in Bangla language and we also always talked in our mother language in our house.”

The prime minister said their children started going to school or mixing with other kids there from their childhood and it is natural for them they will learn foreign language.

“Simultaneously we the two sisters tried so that our children can speak in our mother language and they now also speak Bangla. There is nothing to blame them if any problem on accent happens while speaking in Bangla,” she said.

The prime minister said she likes to talk in mother language or her village language. “However we try to speak Bangla properly in the meetings, but when we talk in the house we speak mixing the languages of Gopalganj and Dhaka,” she noted.


“We speak in the both languages as we moved to Dhaka during the childhood and born on the soil of Tungipara. So there are influences of both the languages in our talk and we don’t feel ashamed in this regard,” she said.

Referring to the historic March 7 speech of Bangabandhu, Sheikh Hasina said the Father of the Nation unhesitatingly uttered the language of Gopalganj which created an appeal among the people.

Referring to her government’s steps for upholding the dignity of mother language, Sheikh Hasina said her government is working relentlessly to ensure the use of Bangla at all levels and sectors of Bangladesh.

“We’re also working for proper preservations of the mother languages of various ethnic minorities,” she said.

The premier said due to timely initiatives of her government, the UNESCO on November 17 in 1999 declared 21 February as the International Mother Language Day in memory of the martyrs of the great Language Movement.

“When we got this recognition, we took a decision that we will set up an international mother language institute and accordingly, I along with the then UN secretary general Kofi Annan laid its foundation stone on March 15 in 2001,” she said.


Sheikh Hasina said but the BNP-Jamaat alliance after coming to power in 2001 stopped its work. “Not only they stopped the work of the International Mother Language Institute, but also cancelled all development projects that we had taken,” she said.

The prime minister said with a huge mandate of the people the Awami League formed the government in 2009 again and resumed the work of the institute.

“We passed the International Mother Language Institute Law in 2010 and on 21 February the same year, I inaugurated the Institute building … we want to strengthen the institute further,” she said.

The prime minister said a language museum has already been set up at the International Mother Language Institute and it is gradually getting rich.

“Our language movement, the historic 7 March speech of Bangabandhu and the speech delivered by the United Nations in Bangla and the identities of languages of Asia, Australia and the Pacific countries have been displayed in the museum,” she said.

Sheikh Hasina hoped that all the mother tongues of the world will soon find a decoration place on the walls of the museum.

The premier said the International Mother Language Institute has already been accredited as Category II Institute of UNESCO. “Through this recognition, our love for language has got widened in the world,” she said.

Sheikh Hasina said she wants to set up a trust fund for the institute alongside conducting its regular activities like curriculum and giving fellowships or scholarships.


“We want to constitute the trust fund as we had seen that after the changing of the government in 2001, the BNP-Jamaat alliance government had halted the works of many projects that we launched … we want to do it so that none can close down it anymore,” she said.

The prime minister said her government wants to make an arrangement so that the people intending to learn different languages can learn those languages through the institute after paying a fee. “But we’ll provide fellowship or scholarship to them,” she said.

“Our government will provide seed money for the trust and will provide fellowship or scholarship from the interest of the money for learning languages,” she added.

Remembering the glorious history of the Language Movement, the prime minister said: “In fact, immortal Ekushey has taught us sense of self-dignity and not to bow down the heads.”

Putting emphasis on teaching that history to generations after generations, Sheikh Hasina said the day is very important for the nation as independence of the country was written by the letters of its (Ekushey) blood.

Sheikh Hasina said the immortal Ekushey is a bright and great chapter of the thousand year’s history of Bangalee’s glorious struggles.

“Such sacrifice of the patriot Bangalee for establishing the dignity and honor of the mother tongue is quite rare in the world history,” she said, adding the glorious history should be reached new generations.

Referring to Bangabandhu’s outstanding contributions to the Language Movement, the prime minister said he got involved in the movement at the beginning of the language movement.


She mentioned that Bangabandhu Sheikh Mujib then said no nation can tolerate the humiliation of mother tongue. According to his proposal in 1948, the Rashtrabhasha Sangram Parishad (State Language Movement Committee) was formed in association with Chhatra League, Tamddun Majlis and other student organizations.

The premier said Bangabandhu was the main driving force in all subsequent movements and he had to endure a lot of persecution while fighting for the mother tongue.

“You all know that history. The Father of the Nation has written that sequential history in his ‘Unfinished Memoirs’ and ‘Karagarer Rojnamcha (Prison Diary),” she said.

“Bangladesh is moving fast and it will continue to advance and the graduated to a developing country from a least developed one … our aim is to a hunger-and-poverty-free Sonar Bangla as dreamt by Bangabandhu and Insha Allah we could achieve the goal by keeping up the success,” she said.

The prime minister said: “The year 2020 is a particularly important year in our national life as the birth centenary of our Father of the Nation Bangabandhu Sheikh Mujibur Rahman is going to be celebrated.”

“The celebrations of the Golden Jubilee of our Independence and the birth centenary of the Father of the Nation will continue simultaneously in 2021,” she said.


Sheikh Hasina reiterated her determination to light up every house of the country within Mujib Borsho. “There will not be a single person to remain homeless, hungry, illiterate and without treatment,” she said.

Five children of four countries– India, Congo, Russian Federation and Bangladesh– thanked the prime minister in their own languages at the function.

Later, the prime minister visited the office of the National Implementation Committee for the Celebration of the Birth Centenary of the Father of the Nation Bangabandhu Sheikh Mujibur Rahman at the International Mother Language Institute.

Chairman of the committee National Professor Mohammad Rafiqul Islam and Chief Coordinator Dr Kamal Abdul Naser Chowdhury greeted the premier by presenting her with a bouquet.

The prime minister later visited a photo and painting exhibition on Bangabandhu at Shilpakala Academy in Segunbaghicha.

Accompanied by Sheikh Rehana and Saima Wazed Hossain, Sheikh Hasina saw with keen interest different historic photos and paintings on the Father of the Nation.


The exhibition titled “Lightning the Fire of Freedom Bangabandhu Sheikh Mujibur Rahman” has been presented by the Centre for Research and Information and produced by Samdani Art Foundation.

The exhibition is a part of Dhaka Art Summit which was held at the Shilpakala Academy from February 7-15.

The exhibition will continue till March 31 marking the Mujib Borsho, the organisers said.
(BSS)