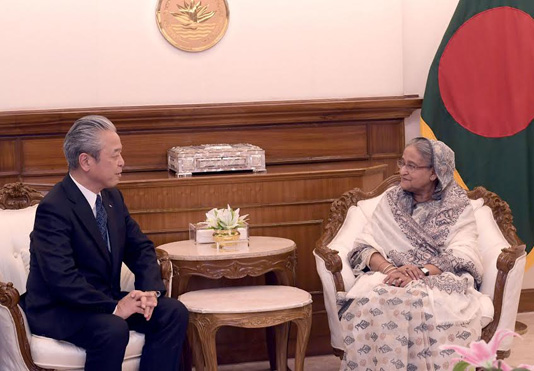 The premier made the remarks when Satoshi Onoda, the president of JERA Co.
Inc, the largest electricity producing firm in Japan, paid a courtesy call on
her at her office here this afternoon.

The premier appreciated the Japanese companies including JERA for making
investment in Bangladesh’s power sector.

The JERA president apprised the prime minister that their company is now
generating 60,000 MW of electricity in Japan which is 50 percent of the
country’s total demand.

“We’re making huge contributions to our economic development by producing
this electricity,” he said.

Satoshi Onoda informed the prime minister that with the joint venture of Reliance Bangladesh Power and LNG Company, they are setting up a 718-MW power plant in Meghnaghat.


The JERA president said they have already set up 335-MW power plant with joint venture of Summit Power Ltd of Bangladesh. “We want to establish some more power plants in joint venture with Summit,” he said.

Satoshi Onoda also said the Summit-JERA-Mitsubishi Consortium has already submitted an expression of interest (EOI) to the government for setting up an LNG terminal in Matarbari, Cox’s Bazar.