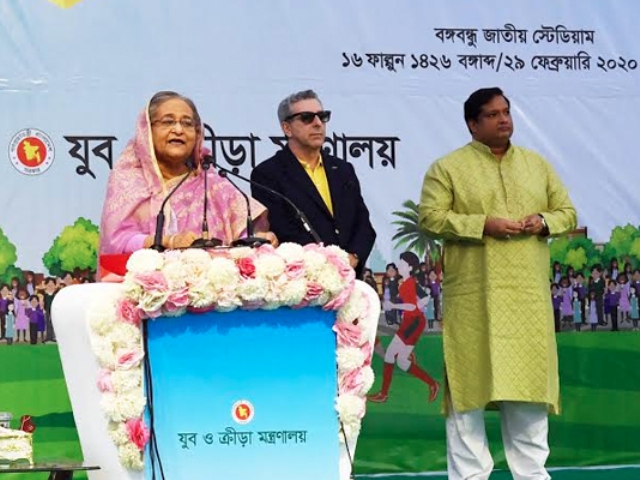 
The prime minister simultaneously vowed to build the children as the country’s worthy citizens by flourishing their talent and keeping them away from terrorism, militancy and corruption.

“Our children and juveniles are very meritorious and we want to build them as good citizens by flourishing this talent and keeping them away from terrorism, militancy, narcotics and corruption,” she said.

She also stressed the need for practicing sports and culture regularly alongside study by the children for flourishing their physical and mental growth.

“Practicing of sports and culture is very much essential for building a healthy life and mind. And participating in the competition helps flourish their hidden talent and bring glory for the country,” she said.

Sheikh Hasina said Bangladesh attained outstanding achievements in different disciplines of sports in recent time. “We’ll have to keep up this trend of success,” she said.

Barisal Division became champions in the boys section by beating Chattogram Division by 2-1 in the final.


In the girls’ section, Khulna Division clinched the title defeating Dhaka Division by 4-3 goals in the tiebreakers. The regulation time of the game ended in a 2-2 draw.

State Minister for Youth and Sports Zahid Ahsan Russel spoke at the function as the special guest.

The Ministry of Youths and Sports organised the tournaments in cooperation with the Directorate of Sports across the country.

A record number of 4,828 teams took part in the boys’ and girls’ section tournament that kicked off at Tangail Stadium on September 1.


Earlier, the prime minister, sitting on the VVIP Box of Bangabandhu National Stadium, witnessed the second half, extra time and tiebreakers of the final match between Khulna Division and Dhaka Division of Bangamata Sheikh Fazilatunnesa Mujib Girls’ U-17 National Gold Cup Football Tournament.

The prime minister congratulated the players, coaches and other concerned of the teams which became champions and runners-up in the tournament.

She also congratulated the organisers and other concerned for making the tournaments successful.

Praising the girls for their performance in the final of the Bangamata Sheikh Fazilatunnesa Mujib Girls’ U-17 National Gold Cup Football Tournament, Sheikh Hasina said: “I’m very happy to see their performance.”


“There is no doubt that these (age-level) players will one day play in our national team and as a result, excellence of our games will enhance further … I’m very hopeful (about them),” she said.

Pointing out her family attachment to games and sports particularly football, the prime minister said her grandfather, father and brothers used to play soccer. “My grandchildren also play football,” she said.

“My brothers — Sheikh Kamal and Sheikh Jamal – were actively involved in the games and sports,” the premier said.

Sheikh Hasina said Sheikh Kamal, who founded Abahani Krira Chakra, was the pioneer of modern football and “I can at least say I’m also a member of a sports family,” she said.


Paying tributes to Bangabandhu, the prime minister said: “Bangladesh earned independence, got recognition as an independent state as well an identity under his leadership.”

“Since his childhood, the Father of the Nation made struggle for the people of the country and he was also a footballer during his student life,” she said.

The prime minister said after independence, Bangabandhu took many pragmatic measures for expansion of games and sports in the country. “Following his footprint, we have also taken many initiatives for the development of sports and games in the country,” she said.

She said her government is working with a goal of establishing a developed and prosperous Bangladesh as dreamt by the Father of the Nation.

Sheikh Hasina enunciated her government’s strides for the development of games and sports in the country.

“After assuming office by the Awami League government in 1996, the success in the country’s sports arena started blooming and at that time the seeds of Bangladesh’s success in world cricket were sowed,” she said.


She said the government has modernised stadiums in Dhaka, Narayanganj, Chattogram and Khulna and repaired sports infrastructures across the country.

“Steps have been undertaken to build Sheikh Russel Mini Stadium in every upazila aiming to expand the games and sports in the country’s remote areas,” she said.

She said the construction of 125 stadiums have already been completed, while 171 more stadiums will be built under the current fiscal year.

“We’ve also taken initiatives to introduce inter-college and inter-university football competitions so that students become healthy and get scope of flourishing their talents through it,” she said.
(BSS)