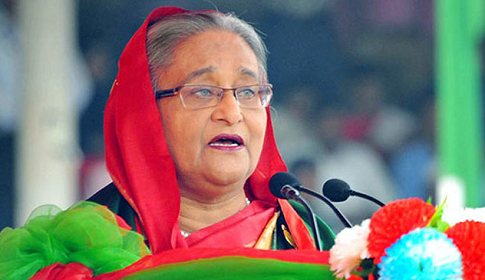 She was addressing a function as the chief guest marking the first ever observance of the “National Insurance Day” at Bangabandhu International Conference Centre (BICC) here. She said “The introduction of information technology will help reduce corruption and make easier the process of reaching the insurance services to the people.”

In this context, the prime minister reminded the authorities concerned about launching of Bangabandhu Satellite-1, bringing all the unions across the country under broadband coverage and having available mobiles phones in people’s hand.

The premier also handed over “Bima Padak” to five persons for their outstanding contribution to the insurance sectors. She earlier unveiled the covers of two books of the Bangladesh Insurance Development and Regulatory Authority (IDRA) titled “Bima Manual” and “Bima Nirdeshika”. A video documentary on the development of insurance sector was also screened on the occasion.

Finance Minister AHM Mustafa Kamal presided over the function, while Senior Secretary of the Financial Institutions Division under the Ministry of Finance Md. Ashadul Islam and Chairman of Bangladesh Insurance Development and Regulatory Authority (IDRA) Shafiqur Rahman Patwary, spoke at the function.

She added: “Awareness regarding insurance in our country is indeed very low. Conduct a massive awareness campaign to let the people know the good side of the insurance.”

Calling upon the companies to take the insurance concept to the masses, she said, “It will be easier to earn confidence and trust of the people at the villages as they are now very cautious.”

She went on saying that the people who are using cars, in most of the cases they don’t have proper insurance and they carry a third party insurance paper.

“But, they do not get anything when occur accidents,” she added.


Referring to the fire incidents at jute godowns soon after the Liberation and several previous random fire incidents at garments factories, the prime minister said that some people at that time tried to take advantages of having insurance which came out through investigation.

“You (insurance companies) have to send people for inspection with a background of having proper training and honesty,” she opined.

Noting that the insurance industry can generate huge employment across the country, Sheikh Hasina asked the companies to appoint educated unemployed youths particularly females as agents of their organizations.

“In this regard, all the insurance companies could work in unison,” she said.

The premier said a directive has been issued to bring transparency in transactions in the insurance industry. The prime minister said the Ist March was declared as the “National Insurance Day” as on the day Father of the Nation Bangabandhu Sheikh Mujibur Rahman joined the then Alpha Insurance as regional chief of East Pakistan in 1960.


She said Bangabandhu conducted his political activities throughout the country in the name of boosting its activities at the grassroots by taking the advantage of being an insurance employee.

“Our government has been trying to develop the insurance industry. We enacted new Insurance Act 2010 in place of age-old Insurance Act of 1938,” she said.

“The IDRA has taken several effective steps to ensure inclusive insurance,” she added.


Alongside the general insurance, she said her government has introduced insurance for the expatriate Bangladeshi workers with giving incentives from the public exchequer.

In this context she said, “We are going to introduce

“education insurance” soon. A proposal has been made to introduce “Bangabandhu Education Insurance” and we are actively considering it.”

Noting that the Bangabandhu government had issued ” Bangladesh Insurance (nationalization) Ordinance-1972″ for development of the insurance industry by giving due importance, she said, “Being an employee he knew what was required for the development of the sector.”

Bangabandhu also formed four insurance corporations after the name of rivers, Surma, Rupsa, Teesta and Karnaphuli and formed “National Insurance Corporation” to control those, She mentioned.

Realizing the importance of efficient workforce, she said that the Father of the Nation formed an autonomous body “Bangladesh Insurance Academy” for ensuring proper education and training to the insurance employees for overall development of the industry.


Sheikh Hasina said Bangabandhu has given us the independence of the country, and our target is to transform Bangladesh into a prosperous and developed one as envisioned by him.

Let’s work together to this end as we are going to celebrate the “Mujib Year” from 2020-2021 marking the birth centenary of Bangabandhu and the Golden Jubilee of independence,” She said.
(BSS)