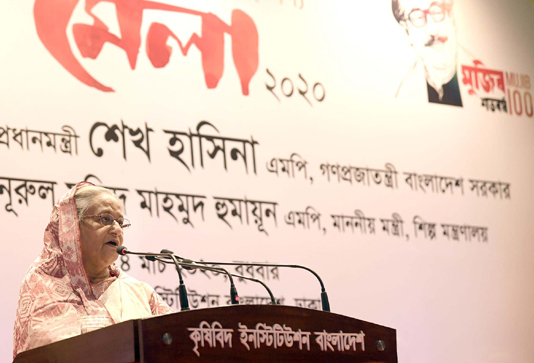 “Many of our SME products are world standard and they’re also associated with our cultural heritage. So, we’ll have to undertake some measures for developing the SME sector further,” she told the opening ceremony of the nine-day fair as the chief guest at the Krishibid Institution, Bangladesh (KIB) Auditorium at Farmgate here this morning.

In her first proposal, the premier said the entrepreneurs will have to concentrate more on producing hundred percent export-oriented high-end demanding goods side by side our heritage products.


Sheikh Hasina said secondly, the entrepreneurs will have to manufacture complementary goods to the heavy industries by the SMEs and thirdly, flourish the Blue Economy through SMEs.

Fourthly, they (entrepreneurs) will have to focus more on turning Bangladesh into a partner of ‘Global Value Chain’ using a low cost of production in combination with modern technology, she said.

Fifthly, the country’s scientists and researchers will have to give more attention towards coordination/hybridisation of three innovative sectors — digital, biological and physical — so that Bangladesh can keep pace with fourth industrial revolution (4IR), she added.

Industries Minister Nurul Majid Mahmud Humayun presided over the function,while Chairman of the Parliamentary Standing Committee on the Industries Ministry Amir Hossain Amu was present as the special guest.

SME Foundation is organising the fair at the Bangabandhu International Conference Centre (BICC) in the capital.


She suggested the youths to launch small businesses by taking loans instead of not running after jobs.

Sheikh Hasina said collateral-free loan is being disbursed from the Karmasangsthan Bank and the SME Foundation, and the entrepreneurs can start business by taking loans from there.

Pointing out that the interest rate of the bank loans are very high, she said the government has taken initiatives to cut the lending rate. “We want to bring down it to a single digit so that our entrepreneurs can invest by receiving loans easily … we’re creating this facility (for them),” she said.

The prime minister said her government has ensured food security for the people. “We’re now concentrating on ensuring nutrition for the people and they’re getting its benefits,” she said.

“Alongside, we’ll have to generate employment for the people and save the lands suitable to cultivation. To attain the goal, we’re developing 100 special economic zones across the country,” she added.

In this connection, Sheikh Hasina said she has already given directives to the authorities so that the women entrepreneurs can get special facilities there.

“I want the males and females to come forward equally and we want to give special attention to create more female entrepreneurs and I hope that our sisters will be more interested in this regard,” she said.

The prime minister said Father of the Nation Bangabandhu Sheikh Mujibur Rahman enacted the Territorial Waters and Maritime Zones Act soon after independence to establish sovereign rights of the people on the sea and sea
resources.


“After assuming office by the Awami League government, Bangladesh achieved huge quantity of maritime boundary and we’ll have to utilise the marine resources in our economy and for this we’ll have to take steps,” she said.

Placing emphasis on strengthening the connectivity, Sheikh Hasina said smooth transportation and marketing of the products is not possible without it. “Keeping this in mind, we’ve taken various measures,” she said.

The prime minister said: “We’ll have to create our domestic markets side by side with exporting goods abroad and focusing this, we’re working.”

She went on saying: “We’ll also have to explore new markets alongside creating domestic markets. We’ll have to take initiatives and search that the demand of which items is high in which country and accordingly, we’ve to produce those goods.”

Sheikh Hasina said more importance should be given to set up food processing industries as the demand of food is increasing fast.

Mentioning that the marketing of the products is a problem, she said problem will have to be addressed for the sake of the entrepreneurs as they cannot stay in their house with their products.

“So making proper arrangements for marketing of the products are a must, and to this end, we’ve taken steps for boosting up regional and sub-regional communication alongside our domestic connectivity,” she added.

The prime minister said her government has taken steps to build a skilled workforce in the country as the demand of such manpower is high everywhere.

“We’ve given importance to vocational and technical education and we’re setting up technical schools at upazila level to build such workforce,” she said.


Referring to the digitisation of different sectors, the prime minister
said the government has upgraded the 8000 post offices to digital ones.

“Besides there are digital centres at every place, and scope has been
created so that the people can buy and sell products by staying at their
villages and unions, even sitting at the houses,” she said.

Stressing undertaking more initiatives by all on using digital technology,
Sheikh Hasina said: “We can explore the demand of world markets alongside our
domestic market through it.”

The prime minister said Bangabandhu had established the Small and Cottage
Industry Corporation far before the formation of Bangladesh for expansion of
the SME sector in the country.

“Following his footprint, we’ve taken many programmes for further
development of the SME sector,” she said.

Sheikh Hasina said Bangladesh Small and Cottage Industries Corporation
(BSCIC) is working to develop industries all over the country. “A total of
5,887 industrial units have been set up in the 76 industrial estates of
BSCIC,” she said.

She said a total of Tk 27, 689 crore are invested in these industrial
estates, which created employment for more than 800,000 people.


“We’ll provide all possible assistance for the development of SME Clusters
and enhance infrastructure facilities,” she said.

Sheikh Hasina said her government also framed and adopted necessary laws
and policies for further flourishing of the SME sector.

Wishing the success of the fair, the prime minister said such a fair will
encourage the people in setting up SME industries.

Congratulating the winners of the “National SME Entrepreneurs Award-2020”,
she urged the owners of the big industries to come forward to creating small
entrepreneurs.

“Our boys and girls are very talented and they can make impossible
possible if they get a little scope,” she said.

Earlier, the prime minister handed over the “National SME Entrepreneurs
Award-2020” among two female and three male entrepreneurs for their
contributions to development of the country by setting up SME industries.

Each winner received Taka 100,000, a trophy and a certificate from Sheikh
Hasina.

A total of 296 SME entrepreneurs, including 195 women, will display their
products, including jute, agriculture and leather goods, electrics and
electrical items, light engineering products, handicrafts and plastic and
synthetics items in the fair, organisers said.

No foreign products will be allowed in the fair, they said, adding five
seminars on the promotion of SME entrepreneurs and SME products will be
organised during the fair.


The fair will remain open from 10 am to 8 pm for visitors and there will
be no entry fee.
(BSS)