PM for maximum use of resources thru research for development 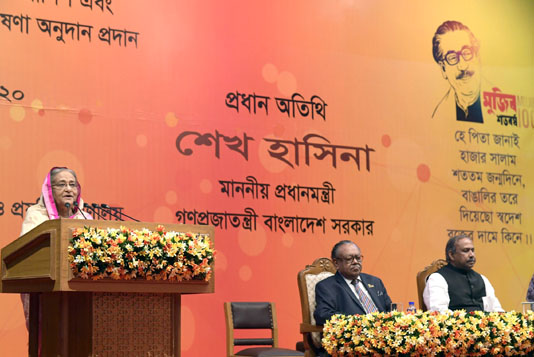 Online Desk : Prime Minister Sheikh Hasina today stressed the need for conducting more research at every sector particularly on the potential ones for maximum use of resources to ensure overall development of the country.

“We must ensure maximum use of whatever resources we have through research. Research is essential for development of any country and no advancement can take place without research,” she said.

The premier said this while distributing cheques among the post-graduate students and researchers under Bangabandhu Fellowship, National Science and Technology (NST) Fellowship and donation for research.

She added: “We would have to conduct more researches in every sector particularly on the potential ones as research is essential for the overall development of the country.”


The premier simultaneously stressed the need for bringing positive result from the researches saying, “It is not enough to conduct only research. But, we want to see the result of the researches for ensuring the standard of livelihoods of the people.”

Sheikh Hasina hoped that the recipients of fellowships and donations would devote them in carrying out their research work more intensively and attentively so that they can give result of their research to the nation.

The premier has suggested to prepare a database of all the fellows to use their particular talent for the overall development of the country.

She has put emphasized on giving special importance on science and technology in carrying out researches, saying, “We would have to step forward in every sectors through doing research.”

The premier asked the researchers to find out the most potential sectors and sites for research that will ensure country’s development.

Urging everybody to infuse inspiration in students for science studies the Prime Minister said, “All concerned to make best their efforts to attract people for science studies as we as build them as science oriented ones through ensuring the practice and exercise of the science.”

The premier earlier joined a photo session with the recipients of the fellowships and donation for research.


Sheikh Hasina said her government has attached utmost importance to education, research and scientific and technological studies to achieve the particular goals of the country’s development.

Mentioning that a country cannot progress ignoring scientific research, she said that Bangladesh’s food autarky, production of strawberry and high yielding paddy was the results of research.

The premier said her government has been working to ensure nutrition security and research is also necessary for it.

“We are third in producing sweet-water fishes, and we are going ahead in producing other food items. Our support for research and scientific studies has contributed to make this happen,” she added.

Noting that a country cannot progress without its development in the area of science and technology, she said “After coming to the power in 1996, we allocated budgetary fund for the first time aimed at giving scholarship to post-graduate students for studies and research in various fields.”

The premier said that the present government introduced the fellowship project with an objective of creating qualified scientists, technologist and researchers in the country to building a science-friendly society and for development of scientific research in the country following the footsteps of the Father of the Nation Bangabandhu Sheikh Mujibur Rahman.

Recognizing the contribution of scientists and researchers in the country’s huge development carried out by her government, she requested them to give more concentration to education and research works as well.


Describing the country’s children as very meritorious in comparison to other countries of the globe, the premier said, “Our children are very much talented. They can turn impossible into possible if they will get a little chance.”

She said her government has been working to create the scope for the Bangladeshi children with further improvement the education system prioritising the science and technology.

The premier once again advocated for stopping group separation from class nine to give everyone the chance to study all subjects particularly the science up to SSC level.

The premier said her government has disbursed around Taka 155.46 crore among 519 students for MS, PhD, and post-doctorial studies from 2010-2011 to 2019-2020 fiscal years under the “Bangabandhu Science and Technology Fellowship Trust.”

She said that the ministry of science and technology has introduced “National Science and Technology Fellowship” for M Phil, PhD, and post-doctorial studies among the students and researchers.

Besides the fellowship, research allowance is being distributed among the scientists and researchers for inspiring them to conduct researches on science and technology.

During 2019-20 fiscal a total of Taka 16 crore was given under 561 projects as research assistance, she added.


The premier said Bangabandhu liberated the country to ensure better life of the masses, adding that her government has been working to build a “Sonar Bangladesh” free from hunger and poverty as envisioned by the Father of the Nation.

“For materialising the dream of Bangabandhu, we are now implementing the perspective plan 2021-2041 and Delta Plan-2100, for giving them the new generation improved and prosperous life,” she added.

The premier greeted all ahead of the birth centenary of the Father of the Nation Bangabandhu Sheikh Mujibur Rahman which will be celebrated throughout the “Mujib Year”.
(BSS)