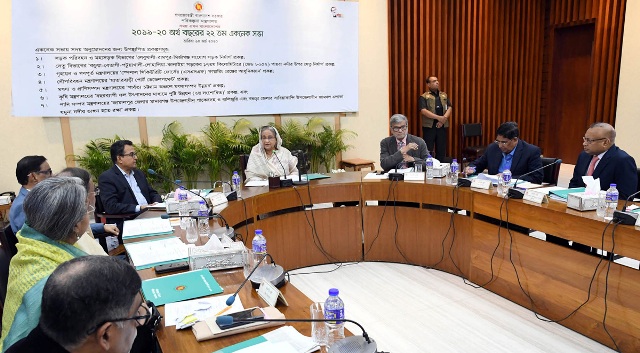 Online Desk : The Executive Committee of the National Economic Council (ECNEC) today approved a total of nine projects involving Taka 24,113.27 crore including Matarbari Port Development Project with Taka 17,777.16 crore in a bid to enhance the cargo handling capacity of the country.

The approval came from a meeting of the ECNEC held at the NEC Conference Room in the city’s Sher-e-Bangla Nagar area with ECNEC Chairperson and Prime Minister Sheikh Hasina in the chair.

Briefing the reporters after the meeting, Planning Minister MA Mannan said that a total of nine projects were approved today involving an overall estimated cost of Taka 24,113.27 crore. “Of the total project cost, Taka 6,151.26 crore will come from the Government of Bangladesh, Taka 2,213.25 crore from the concerned organization’s own fund while the rest of Taka 15,748.76 crore as project assistance,”


Of the approved nine projects, seven are new while two others are revised projects.

The Chattogram Port Authority and the Roads and Highways Division under the Ministry of Shipping will implement the Matarbari Port Development project by December 2026.

The Planning Minister said the main objective of the project is to enhance the cargo handling capacity of Bangladesh through constructing this Matarbari Port including link road and thus fulfill the demand of international trade as well as facilitating speedy port services with the neighboring countries.

Mannan said the Matarbari sea port would be the country’s 4th port after Chattogram, Mongla and Payra and it would be built as a huge port due to the growing pressure of economic activities.

“This is another ‘dream’ project for the country and it will further strengthen our journey towards the ocean as well as boost our trade and commerce,” he said.

The Planning Minister said of the total project cost of Taka 17,777.16 crore for the Matarbari project, Taka 2,671.15 crore will come from the Government of Bangladesh portion, Taka 2,213.24 crore from the CPA while the rest of Taka 12,892.76 crore from Japan International Cooperation Agency (JICA).


Another official at the Planning Commission said that this Matarbari Port would fulfill the government’s aspirations for a deep sea port side by side creating opportunities for anchoring container-laden vessels, open goods-laden vessels and oil tankers at the port jetty.

Besides, this port will minimize the pressure on the Chattogram Port alongside meeting the growing demand of the country’s import and export activities. Goods transportation to and from the potential industrial estates at Matarbari and Moheshkhali will also be facilitated once this port is established.

The Matarbari Port will have two separate Terminals having 300 meter and 460 meter length where ships having 8,000 TEUs containers could anchor due to its 16-meter draft at the port channel.

The main project operations include construction of a multipurpose terminal and a container terminal, procurement of necessary cargo handling equipments and construction of 26.7 kilometer link road.

Revealing the latest progress of the implementation of the Annual Development Programme (ADP) for the July-February period of the current fiscal year (FY20), Mannan said the the implementing agencies could spend Taka 79,785.86 crore during this eight-month period with an utilization rate of 37.09 percent.

The ADP implementation rate during the July-February period of the last fiscal year (FY19) was, however, 39.13 percent with an expenditure of Taka 70,771.78 crore.


The implementation agencies has spent Taka 9,014.08 crore higher during this eight-month period compared to the corresponding period of the previous fiscal year.

Referring to the approval of the construction of a 1690-meter long bridge over River Payra on the Kachua-Betagi-Patuakhali-Lohalia-Kalaiya road with Taka 1,042.28 crore, the Planning Minister said Shirshendu Biswas, a 4th grader student of Patuakhali Government Jubilee High School earlier wrote a letter to Prime Minister Sheikh Hasina to construct a bridge over River Payra.

Following the letter, Mannan said the Premier assured that student of constructing the bridge and after certain formalities; the bridge project has been approved by ECNEC.

Answering to a question on the possible impact of novel corona virus on the country’s economy, he said that the global economy is experiencing some turmoil due to the COVID-19. “There might be some impact on our economy, but we can’t say now to what extent the impact would be.”


The other projects approved in the meeting are Lebukhali-Rampur-Mirzaganj link road with Taka 419.89 crore, Modernization of the firing range of Special Security Force (SSF) with Taka 51.54 crore, Fisheries Development at the CHT region with Taka 118.28 crore, Nutrition Development through producing fruits round the year, 2nd revised with Taka 161.05 crore, Protecting Pakerdaha under Madarganj upazila in Jamalpur and Jamthol area under Sariakandi upazila in Bogra from the erosion of River Jamuna with Taka 584.72 crore, Construction of the headquarter of NSI, 2nd revised with an additional cost of Taka 102.75 crore and Dhaka Sanitation Improvement Project with Taka 3,855.60 crore.