WHO chief calls for widespread virus testing as Europe locks down 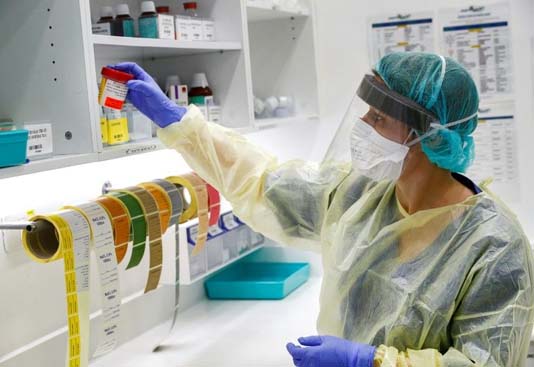 International Desk ; The head of the World Health Organization called Monday for every suspected coronavirus case to be tested, as countries across Europe tightened their lockdowns and global stock markets tumbled again.

Tedros said more cases and deaths have now been reported in the rest of the world than in China, where COVID-19 first emerged in December before crisscrossing the globe.


“This is the defining global health crisis of our time,” he told reporters. “Crises like this tend to bring out the best and worst of humanity.”

However, in China there were continuing signs of improvement, with only four new COVID-19 cases recorded in Wuhan — where the virus was first detected in December — although imported cases rose.

Governments are scrambling to contain not only the spread of the virus but also the economic fallout, with fears it will catapult the world into recession.

The EU will also hold a summit on Tuesday, set to discuss the 27-nation bloc’s response to the virus, including a proposal to close all borders to non-essential travel.

Countries across Europe are on full lockdown, while major US cities have shut bars and restaurants and schools are closing nationwide.

In the latest restrictions in Europe, Germany announced border controls, banned gatherings in churches, mosques and synagogues and said playgrounds and non-essential shops would close.


Spain also announced it would seal off its land bordes as the number of cases edged closer to 10,000, while Britain called for an end to all “non-essential” contact and travel, and Switzerland declared a state of emergency.

France — the world’s most visited country — is bracing for even tougher restrictions after the government also closed schools, bars and restaurants and most shops except for food stories and pharmacies.

Italy — the hardest hit nation in Europe — announced another surge in deaths, taking its overall toll to more than 2,000.

Iran, the country with the highest number of infections and deaths in the Middle East, closed four key Shiite pilgrimage sites.

In the United States, the US Federal Reserve sought again to shore up the economy, announcing another $500 billion in cash injections after slashing its key interest rate to virtually zero.

But stock markets and oil prices went into freefall again as the various central bank moves failed to lift confidence.

“The biggest concern has to be that the big G7 central banks have exhausted their policy tool kit, especially the biggest and most influential one of them all, the Fed,” said AxiCorp’s Stephen Innes.

And European car makers including Fiat Chrysler and Peugeot began shutting down their factories.

Normal life was at a standstill in much of western Europe, with France ordering all non-essential businesses closed and Spain banning people from leaving home except to go to work, get medical care or buy food.

There have been scenes of panic-buying around the world as anxious people stock up on essentials fearing a lengthy period of enforced quarantine.


Larry Grossman, manager at a Manhattan supermarket, said he had never seen anything like it in 40 years.

“I have been through Hurricane Sandy… through 9/11, I have never seen shopping like this,” he told AFP as he restocked empty shelves.

In New York and Los Angeles, bars and restaurants have been closed, while several casinos in Las Vegas have shuttered.

There was pandemonium at several airports as travellers scrambled to get home with countries increasingly slamming shut their borders to prevent the virus spreading.

In the US, passengers complained of massive queues as staff battled with new entry rules and stipulations on medical screening. There is growing opposition to holding the Olympics as planned this summer, and there are also doubts about the European football championships set to take place in 12 countries this summer.


And there have been heartwarming scenes around the world as people attempt to lift spirits.

In Switzerland, Geneva residents applauded, whistled and rang bells from their balconies and windows to thank health workers on the frontline.

Images of Italians singing from their balconies have also gone viral, as the country becomes accustomed to the lockdown.

“A year ago, nobody played (video games) any more so I sold mine. Now I’m kicking myself. I’m fighting boredom by studying a little in the morning and just watching TV,” said 19-year-old Gianpaolo.
(AFP)