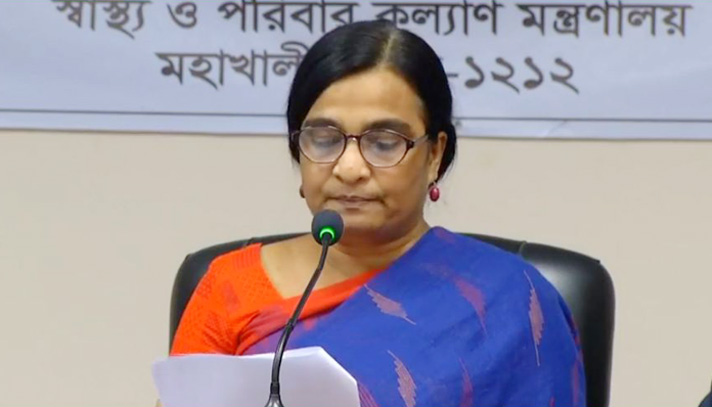 Online Desk : Bangladesh on Monday confirmed the third death from coronavirus. The Institute of Epidemiology, Disease Control and Research (IEDCR) Director Prof Meerjady Sabrina Flora at a briefing through online on Monday also confirmed six new coronavirus cases in the country taking the total to 33. Of the new infected person, one is a health worker, she said.

Five of among the infected have already recovered from the disease. The death toll from the coronavirus or COVID-19 has reached 14,655 globally on Monday, report agencies.

Of the six fresh cases, three are men and the rest are women, Prof Flora said. “Among the newly-infected people, one is aged around 20, two aged about 30 to 40, one over 50 and two more are aged over 60…Two of the six are imported cases who came from India and Bahrain and the rest have been infected locally,” she added.

While sharing details about the total confirmed coronavirus cases in country, the IEDCR Director mentioned that so far three health workers have been found positive for the virus. “One doctor and two nurses have been infected by the virus while treating patients.”


The IEDCR disclosed the detailed statistics about the infected people across the country, including the gender and age ratio as well as locations.

Majority of the patients, 15, are from Dhaka and across the country 10 are from Madaripur, three from Narayanganj, two from Gaibandha and one each from Cumilla, Gazipur and Chuadanga.

The IEDCR Director further mentioned that 13 of the 33 confirmed cases are imported ones. Of them, six came from Italy, two from the USA, two from other European countries and one each from Bahrain, India and Kuwait.

“We’ll be sharing all the detailed information with you through online…all the diagnosed patients except one are currently in stable condition,” she said.


Five of the 33 patients have recovered completely.

In the past 24 hours, Prof Flora mentioned, the IEDCR received 1,716 calls through hotlines while 12 people came to the IEDCR directly.

Following the announcement, a DGHS official mentioned that additional 350 ICU beds will be set up across the country to treat Covid-19 patients though there are around 2,000 ICU beds ready in Dhaka. “If necessary, the ijtema field will be used to set up more beds,” he added.


The DGHS official also said the government has already formed a 31-member national committee to monitor the coronavirus situation while committees at district and upazila levels have also been formed. “We’ll put in place committees at the union level as well to monitor the expatriates and overall situation,” he added.