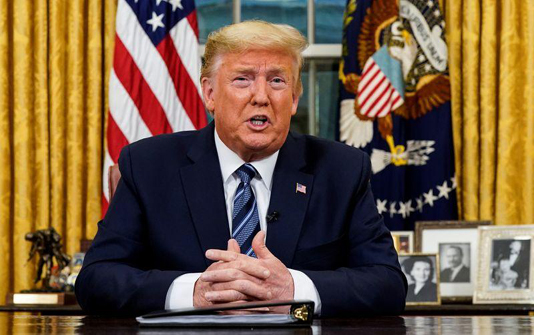 “I called up Jerome Powell and I said, ‘Jerome, you’ve done a really good job,’” Trump said during a daily White House briefing on the coronavirus pandemic, which has hammered the American economy and sent lawmakers scrambling to agree on a trillion-dollar stimulus package.


The Fed last week slashed its key lending rate to zero in its second emergency meeting since the novel coronavirus outbreak that originated in China began endangering the American economy.

The cut was among a host of measures the central bank has taken in recent weeks to boost liquidity, and earlier on Monday it announced it would buy unlimited amounts of government debt — a move akin to printing money.

“He’s not finished,” Trump said of Powell, whom he has in the past criticized and urged to slash interest rates, saying they were hampering the US economy’s growth. “He’s got other arrows in the quiver.”


The president also praised the strong US dollar but acknowledged it makes “trade much tougher” — an unusual statement from an American president, who typically don’t comment on the currency’s value.

“Our dollars have been very strong, especially against other currencies, very, very strong, which again makes that trading more difficult,” Trump said. “But there is something nice about having a strong dollar.”
(AFP)