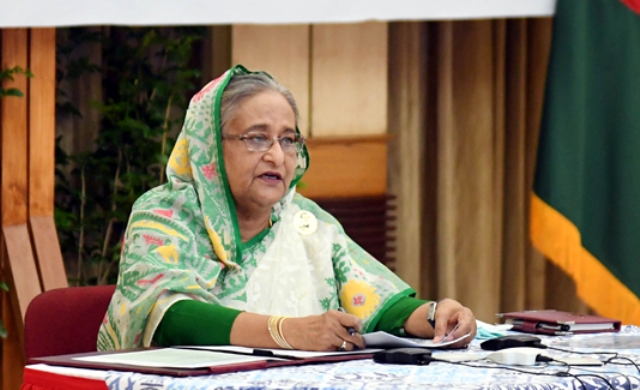 “We had earlier announced a 10-day general holiday from March 26 (to April 4) and it’ll be extended for five more days till April 9,” she said.

The premier said this while exchanging views on the country’s coronavirus situation with the public representatives and field level government officials through video conference from her official Ganabhaban residence here.

When the cabinet secretary drew the prime minister’s attention about the extension of holidays till April 9, Sheikh Hasina said it can be extended till April 9, but it will not be a complete shutdown.


“It can be done on a limited scale, and a scope will have to be created for the movement of some people,” she said.

The movement of transports could be limited, she said, adding that the government will review the situation after completion of the 14-day (quarantine period).

Sheikh Hasina added: “Everything can’t be stopped. The essential things will remain in operation. But all the educational institutions such as schools and colleges will remain closed till April 9.”

Sheikh Hasina said the holidays will have to be extended to stem the outbreak of COVID-19 in the villages as many people have already gone to their village homes soon after the announcement of the 10-day general holiday.

In this context, she said, “We will have to take quarantine period into consideration so that this lethal virus can’t spread.”

The prime minister said the government has to allow some relaxations for some sectors on the limited scale.

The government earlier on March 23 declared a nationwide 10-day holiday from March 26 to April 4 shutting down the government and private offices excepting essential and healthcare facilities over the COVID-19 situation.

All were requested to stay-at-home during the holidays unless they have a good reason to leave their homes to buy essentials such as food and for medical and health care purposes as the kitchen markets, food shops, pharmacies, hospitals and all emergency services remained out of the purview of the general holidays.


The premier, however, sounded a note of warning against any sort of corruption and irregularity in distributing foods among the destitute people, particularly the day-laborers’.

“No corruption and irregularity in this regard will be tolerated anymore. We will not spare anyone, whoever he or she might be, involved in doing so to be rich or wealthy capitalizing on the bad time of the people,” she added.

She has asked all to be alert to this end.

The prime minister also ordered to prepare a separate list of the people who are out of the social safety network programme such day labourers, rickshaw pullers, transport workers, tea-stall vendors to reach essentials to them so that none remains hungry due to the shutdown.

“I am requesting all, including the deputy commissioners (DCs), to work accordingly regarding the social safety net programme. Beside the programme (social safety net), we will have to reach foods to the people such as daily wage-earners, rickshaw pullers, transport workers who have become jobless due to coronavirus situation. It must be ensured that no one remains hungry along with the family,” she continued.


The premier instructed the authorities concerned to ensure that none is left out of the list, adding food distribution will have to be made in a coordinated way and it must be ensured that no single person can get food again and again.

She also asked the authorities concerned to ensure additional allocation of foods to meet the growing demand. She said that currently there is no scarcity of food in the country as there is enough stock.

Sheikh Hasina urged all, particularly the affluent people, to join hands with the government to this end.

The prime minister has directed all to celebrate the Pahela Baishakh, the first day of the Bengali New Year, digitally without creating any mass gatherings, in response to the government “stay-at-home” guideline.

“You can celebrate the Pahela Baishakh digitally as much as you want. But, the celebration by creating mass gatherings must be stopped (as mass gatherings have been prohibited considering the coronavirus situation),” she added.


She, however, said that they have started celebrating the Pahela Baishakh by ignoring many hurdles, adding, “But it is a matter of sorrow that we have to stop the celebration this time due to coronavirus situation. We have stopped it considering the welfare of the people.”

She said there is no need to use the personnel protection equipment (PPE) by all except the health activists, nurses and physicians who are entrusted with giving treatment to the people infected by the coronavirus.

She asked the authorities concerned to create awareness about the use of PPE.

The prime minister asked the public representatives and others concerned to take necessary measures to check the mosquito menace.

Sheikh Hasina said there is a possibility of starting mosquito menace in the summer and the monsoon, and the situation may aggravate further if dengue adds to corona.

“So, you’ll have to take steps from now on to protect the people from the mosquitoes,” she said.


In this connection, the premier advised the people to use mosquito nets while sleeping.

“Many countries of the world are likely to face shortage of foods due to the coronavirus pandemic, and at that time we may have to supply foods. So, we’ve to give attention to this end from now on,” she said.

The prime minister asked all to make sure that no arable land across the country is left out of the cultivation.

In reply, Agriculture Minister Dr Abdur Razzaque said they have directed the officers and employees concerned not to go home and help continue agriculture production.

Noting that there is no shortage of foods in the country, the minister hoped that more Boro crops will be harvested this year than the previous season.

“We’ve also taken initiatives to increase Aush production and I’ve firm belief that there won’t be any crisis of food due to the outbreak of the deadly disease,” he said.

The premier said the world is going to witness an economic recession due to the coronavirus pandemic, and its impact may fall on Bangladesh too.

“Hence, from now on we’ll have to take measures to face this impact,” she said.


About the continuation of production in mills and factories during this period, Sheikh Hasina said their production could be kept up through discussion and maintaining the health safety of the workers and employees.

While exchanging views with public representatives and officials of the Sylhet district, the prime minister said the tea workers could continue their work by maintaining (social) distance among themselves.

The prime minister asked all concerned to ensure the supply of essentials to keep the prices under control.

Regarding the law and order, the premier said, “Law enforcers must be aware in maintaining the law and order. Special attention should be given so that none can commit crimes taking the advantage of this bad time. The activities regarding coronavirus will also be continued as usual.”

Officials of local administrations highly praised the prime minister for her timely measures in containing the coronavirus while she (prime minister) said that there was no crisis of anything including the PPEs at this moment.

A youth, who returned home from Germany with coronavirus infection shared his experience how he recovered from the diseases in Bangladesh through the video conference.


The premier gave a patient hearing to all and thanked the civil and military officials for making their best efforts in fighting the coronavirus, saying, “The situation of Bangladesh is well in comparison to many developed countries due to the efforts of all.”

PM’s Principal Secretary Dr Ahmad Kaikaus moderated the function while Cabinet Secretary Khandker Anwarul Islam along with senior secretaries, and secretaries was also added to the video conference from the Secretariat.

Stressing the need for coordinated efforts, the Prime Minister said, “All concerned, including the public representatives and the government officials, police and health department have to work in a coordinated manner to protect the people from coronavirus infection as the protection of the health of the people is the topmost priority of the government.”


She once again called upon the countrymen not to panic over the coronavirus issue as her government has successfully tackled several disasters many times in the past.

The premier reiterated her firmness to win the war against coronavirus likewise the Liberation War of 1971 with the support of the people.

For this, she asked all to follow strictly the health guidelines of the government including the ‘stay-at-home’ order.

The premier requested all to go to hospitals in case of having any symptom of the COVID-19 without making any delay for the good of the patient, family and neighbours.

“Don’t hide the disease as it will bring disaster for you, your family and neighbours,” she asked the person infected with the virus.

The prime minister said creating awareness among the people is a must to fight coronavirus.

In this context, she said, “Our country is a small one but is densely populated. We have successfully been able to create awareness among the people regarding the lethal virus. So, the situation is still under better control compared to other countries.”


“The blow of coronavirus is still persisting in the world. So, we need to be more careful to stop the spread of coronavisrus in the days to come,” she continued.

At the same time, the Prime Minister asked all not to pay heed to any rumour spreading through the social networking sites using the facility of digital Bangladesh.

Urging all not to spread any rumour, she directed the authorities concerned to take punitive actions against those involved in this crime.
(BSS)