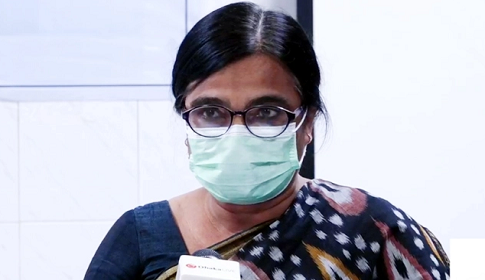 Online desk ; Bangladesh today feared the novel coronavirus to expand its clutches with an extra wrath in the next one month as the virus overnight claimed three more lives and infected 35 others increasing the toll to 12 and number of infected people to 123.

Flora added that detection of fresh 35 cases during the period now took the number of coronavirus cases to 123 in the country while 64 of them were found in Dhaka, 23 in Narayanganj, 11 in Madaripur and five in Gaibandha.

She said the rest of the cases were reported from elsewhere as COVID-19 appeared to have spread its clutches on at least 15 of the country’s 64 districts.


Flora said the fresh 35 cases were detected as “we have tested 468 samples though 14 labs across the country in the last 24 hours” while among the infected 30 were male and five female and 11 of them were in their 40s and six in their 20s.

Health minister Zahid Maleque earlier today at a meeting warned the country was likely to be exposed to extra COVID-19 risks in the next 30 days as healthcare officials said “community transmission” of the virus began.

Maleque during the meeting, however, quoted the overnight COVID-19 death figure to be four, which Azad later called “a mistake” caused by erroneous double counting of one of the victims.

The minister appeared before the media virtually emerging from an emergency meeting with concerned officials under the purview of his ministry, representatives of doctors’ forums including Bangladesh Medical Association (BMA) and non-government organizations.

Maleque urged all to be more cautious against COVID-19 in the next one month saying “the next 30 days are very crucial”.

A health ministry spokesman later told BSS that the meeting discussed ways to keep people indoors and ensure use of protective gears including masks and germicides alongside enhanced engagement of private hospitals during the pandemic.

Health officials said Dhaka’s Tolarbagh and Bashabo, Madaripur, Narayanganj and Gaibandha appeared to be the worst coronavirus-prone areas while Flora today called Dhaka and Narayanganj COVID-19 “hotspots” as maximum number of cases were detected in the two cities.