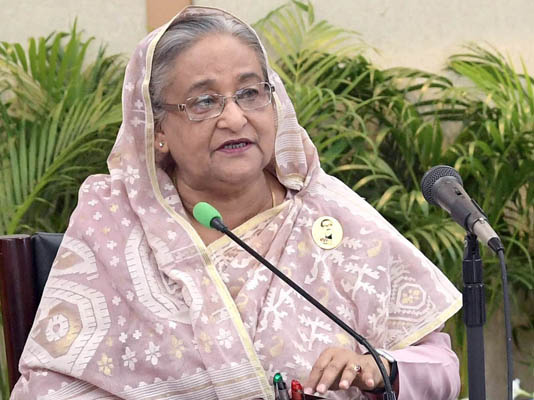 They noted that the announcement of this stimulus package is a praiseworthy effort by the Prime Minister who is working to help the economy overcome this COVID-19 shock.

Welcoming the Prime Minister’s move for announcing such a huge package, Kholiquzzaman said Sheikh Hasina deserves appreciation for the Taka 72,750 crore stimulus package which is almost 2.52 percent of the GDP size.


He underscored the need for proper implementation this package by those responsible for it so that the targeted groups are really benefitted.

The PKSF chairman said the government would have to act fast in this regard by framing necessary policies and guidelines and thus ensuring that the workers get its benefits and no middlemen could interfere in it and enjoy the fruits.

“The government will have to keep its eyes on it. Even our Prime Minister also cautioned that corruption won’t be tolerated during the implementation of this package. I hope there won’t be any corruption here and if that happens, the culprits should have to be brought to book,” he said, adding that the Prime Minister has already issued a strong warning in this regard.

Kholiquzzaman Ahmad, also the chairman of Dhaka School of Economics (DScE), said the government should have to ensure proper implementation of this package and the targeted people like the workers, people who are lagging behind, and micro entrepreneurs, could enjoy its benefits.

Mentioning that the Taka 30,000 crore fund to be provided to the affected industries and service sector organizations as working capital through banks as low-interest loans would be very important, he said there might be a crisis of working capital following the COVID-19 shock and it has to be ensured that such fund does reach to the targeted organizations.

The renowned economist also suggested that the the second package of Taka 20,000 crore as working capital for the small and medium enterprises (SMEs), including cottage industries must also reach properly to the micro and cottage industries as well as to the SMEs.

He said many micro and cottage industries do not have much access to the banks and a suitable method should have to be evolved to reach the benefits of this package to those.


“If these micro entrepreneurs face debacle, then they won’t be able to turn around. We’ll have to reach them,” he added.

PRI Executive Director Dr Ahsan H Mansur said the size of the overall stimulus package as well as its coverage is good.

He said the large-scale industries might not be affected to that extent due to COVID-19 since those have capacity to deal with such situation while many of those also have turnover of thousands of crores of Taka.

“But, the SMEs and the micro industries will be the most affected and the government will have to give special attention to and emphasis on those as the Taka 20,000 crore allocation in the stimulus package won’t be good enough for those and they might need more,” he said.

The BRAC Bank chairman also suggested the government for developing a mechanism so that the micro and SMEs are not evicted from their factory or industry buildings due to non-payment of their house rents as they could be hardly affected because of COVID-19.


He said the government could take measures for making half their house rents as long as COVID-19 continues to take toll on the economy.

Talking to the national news agency, FBCCI President Sheikh Fazle Fahim welcomed the Taka 72,750 crore stimulus package and opined that it would help the micro, SMEs and large enterprises as well as the manufacturing, agriculture and the services sectors.

“If this package is utilized in a targeted and focused way, then it will be helpful for addressing unemployment, keeping the economic activities normal as much as possible,” he added.

The FBCCI President said since the consumer spending and the export earnings are slightly on the downtrend now, the government in its stimulus package is focusing on raising public expenditure so that the economy can proceed at the pace that it is now going on.

“I think whatever measures the government is taking are targeted and focused and these measures are being taken targeting each sector and also across the board,” he added.

The head of the country’s apex trade body also opined that although the country is likely to pass a tough year ahead, it would be possible to overcome this tough time through public and private cooperation and also if these measures are implemented in a structured way.


DCCI President Shams Mahmud also welcomed the stimulus package announced by the Premier, saying that the SME sector is rightly prioritized in this package.

He said since the loan facility would be extended mainly on the basis of bank-client relationship and the concerned banks should consider which business houses and clients are good having sound track record as well as pay taxes regularly.

The DCCI president said the central bank is likely to create a special fund for the agriculture sector and it has to be ensured that the benefits of this fund do reach the basic or grassroots level.

He said as the banks would disburse the funds under the stimulus package, a modality should have to be fixed so that the banks could reach everyone side by side the banks should not give loans to those who would not pay back or do have bad track records.


In a televised address from her official Ganabhaban residence yesterday (Sunday) morning, the premier said with the fresh allocations in addition to the previous Taka 5,000 crore package, the total amount of financial assistance under the stimulus package would stand at Tk 72,750 crore, which is nearly 2.52 percent of GDP.
(BSS)