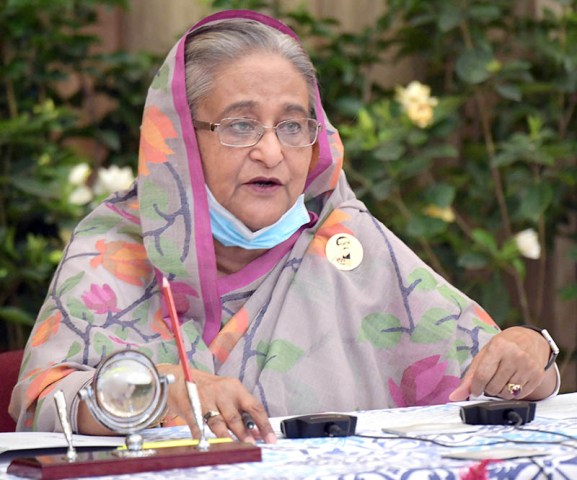 Sheikh Hasina simultaneously blasted those doctors and nurses who are denying to provide healthcare services to the people in this critical time and hinted at taking stringent actions against them.

“We want to reward the brave health workers, including doctors, nurses and other health professionals as well as the employees of the republic like field- level officers, members of the armed forces and law enforcement agencies who
are working day and night risking their life to prevent the Covid-19,” she said.


“So, we’ve decided to introduce a special health insurance scheme for encouraging them in doing more work and I’ve already talked to the finance minister and secretary to this end,” she said.

The premier made this announcement while exchanging views with the public representatives and officials of the 15 districts in Chattogram and Sylhet divisions through a videoconference on the present coronavirus situation in the country from her official Ganabhaban residence.

The premier also declared that the government will take responsibility of the treatment of those who will be infected by the lethal virus while performing their duty. “We’ll make arrangements of health insurance amounting to Taka 5 lakh to Taka 10 lakh for the Covid-infected service providers as par their status,” she said.

Sheikh Hasina said that the amount will be increased five times if anybody dies or has death risk due to the virus.


The premier extended her sincere thanks to the government doctors, nurses and health workers who are working tirelessly to provide services to the people showing no negligence. Mentioning that the government has declared a war against the beastly disease, she said the doctors, nurses and health workers are making huge contributions to this end. “They’re performing their duties in this battle from the frontline,” she said.

Sheikh Hasina also thanked the field-level officers and employees and members of the armed forces and law enforcement agencies and others involved in preventing the disease and relief distribution.

“I want to thank them as we were so far able to keep the coronavirus situation under control (due to their relentless strides),” she said. The prime minister continued: “We don’t want to extend thanks to them only verbally, we also want to give rewards to them.”


In this connection, Sheikh Hasina said she has already instructed the authorities concerned to prepare a list of those doctors, nurses and health workers who have been working directly since the beginning of the outbreak of Covid-19.

“I need their list as I want to give rewards and special honorariums to them … it’s needed to encourage the brave health workers,” she said, adding that the work on preparing their list has already started.

The prime minister said this incentive will be applicable to those who are working risking their lives from the beginning of the Covid-19 outbreak.

“Those who didn’t perform their duties, fled for their own protection and denied to provide treatment to the people won’t get this incentive … it’s not applicable to them,” she categorically said.

Sheikh Hasina said: “If anybody gives condition that he or she will discharge his/her duty if gets this incentive, then we’ll keep them under observation and see their work for at least three months and we’ll consider it if they truly serve the people,” she said.


In this connection, she said there is no logic to give incentive to those who have no sense of humanity. “If the country faces such bad days in future, we’ll bring physicians and nurses from outside,” she said.

Sheikh Hasina said the country will not benefit from the people having weak mentality. “It’s a reality,” she added. The prime minister said: “Whatever meetings they hold and whatever conditions they place, I don’t care, rather they’ll have to think whether they could continue in their profession in future.”

Sheikh Hasina added: “I want to know the names of the physicians who denied to provide treatment to the people or remained absent at their workplaces … I think those who have no capability of serving the people should be sacked.”

The prime minister said there is no doubt that the country needs physicians. “But why they’ll have such a mentality (of denying treatment) and why they lose the sense of humanity in this critical time?” she questioned.

Sheikh Hasina said a doctor can provide healthcare services to a patient by protecting himself or herself by wearing apron, mask or gloves or using hand sanitizer. “Why a patient will return (without treatment) … why a Dhaka University student will die after being denied treatment?” she said.


The prime minister said the coronavirus panic grips the entire country and the world. “I know that all need to be protected. But a doctor has also a responsibility. We’re providing equipment whatever they need and we’re not making any hesitation regarding this,” she said.

Referring to the announcement of Taka 72,750 crore stimulus package to overcome the possible impact on the country’s economy, she directed all concerned to spend the money properly.

She issued a strong warning against corruption in this regard, saying: “We’ll not give a bit of concession to this end.”

Sheikh Hasina instructed the officials concerned to make arrangements for ration cards so that the needy people can get foods at low prices.

“It is seen that the assistance doesn’t reach the specific people due to bad habit of some persons. If we could make this arrangement, the people will get foods at low prices,” she said.

At the same time, she reminded the officials concerned to prepare a list of the distressed people who remain out of the social safety net programmes to provide foods and other assistance to them.


The distribution of food free of cost and social safety net programmes will continue in the country, she said, adding: “But you’ve to find out and prepare a list of those who used to earn livelihood by doing daily works as their income has stopped due to the nationwide shutdown.”

Sheikh Hasina directed the officials concerned to help the low-income and middle class people by providing rice at Taka 10 per kg and through ration cards.

Elaborating her government’s strides to provide assistance in this critical time, the prime minister said the government is continuing distributing rice at Taka 10 per kg among the poor. “We’ve directed the authorities to reach foods to every house,” she said.

Referring to the announcement of Taka 72,750 crore stimulus package, she said the package has been declared to accelerate the pace of the wheels of the country’s economy.

“We’ve also given special incentive so that the salary and allowances in the industrial sector are not halted … I think if these packages are properly implemented, we will have no problem,” she said.

Issuing strong warning against corruption, the premier said it is seen during bad times that some people want to make money and change their fate through graft.


“But we want to say clearly that I’ll not give even a little concession to those who will indulge in corruption taking the chance of the plight of the people,” she said.

Urging all to work together to contain the Covid-19, the prime minister said: “We don’t want the spread of the disease further and for this all will have to follow the health codes strictly.”

Mentioning that April is a crucial month for the country due to the coronavirus, Sheikh Hasina said anybody experiencing any symptom of the disease will have to visit the physicians.

“Please don’t conceal the disease and you may infect others if you hide it and it’s not a matter of shame … we’ve make all kinds of arrangements for the treatment and we’ve also taken steps for protection of those who will provide treatment to the Covid-19 patients,” she said.

The prime minister said the whole world got stagnant as the Covid-19 has spread 202 countries and territories and it is expanding day by day.

“From the beginning, we tried to stem the outbreak of the disease and protect the people from its impact,” she said.

“If we see the trend of spreading the disease in the world, it’s like mathematics and if we gather the experience of other countries, the country may face massive blow of it in this April and we’re getting this symptoms and reports,” she said.


She went on saying: “In this situation, we’ve to remain more cautious and move in such a way so that the people are less affected by its impact.”

Later, the prime minister exchanged views with the cross section of the people including ministers, MPs, deputy commissioners, police supers, mayors, chairmen, civil surgeons, imams, doctors, nurses and others on the coronavirus situation of their respective districts through the videoconference.