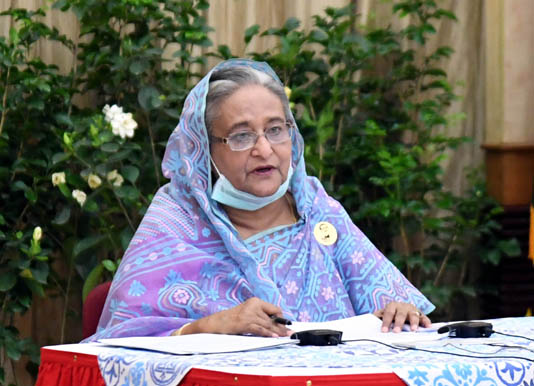 Online Desk : Prime Minister Sheikh Hasina today said her government has announced various stimulus packages worth around Taka one lakh crore to save the people and the economy from the crisis arising out of the coronavirus pandemic.

“We have declared various financial stimulus packages of around Taka one lakh crore for not only overcoming the crisis of today, but also for the next three years so that all can run their business and industries properly after the bad time they are now facing in the wake of coronavirus outbreak,” she said.

The premier said this while joining a donation handover ceremony through videoconferencing from her official residence Ganabhaban here this morning. PM’s Principal Secretary Dr Ahmad Kaikaus received the donations in cheques on behalf of the premier at the Prime Minister’s Office (PMO) here.


The prime minister said she had declared the stimulus packages of around Taka one lakh crore, which is 3.3 percent of the GDP, for all the people ranging from the farmers, day labouerers, rickshaw pullers and small traders to the industrialists to save the people and country’s commerce and industry to offset the possible impact of coronavirus on the country’s economy.

Extending her heartiest greetings to the organisations and individuals for giving donations to her relief and welfare fund, she said, “You (businessmen) should work your best so that the country’s economy is not hampered due to the coronavirus outbreak.”

She asked the affluent people to distribute relief materials in coordination with the government agencies instead of giving those separately to ensure that each and every people get relief.

The premier called upon all, irrespective of party affiliations and opinions, particularly the civil society to join hands with the government in helping the needy people during their bad times instead of making wholesale criticism against the government.


In this context, she said, “Unfortunately, some people and parties have been saying many things about relief distribution but they are not extending their helping hands in this regard. They are busy with making criticisms the government.”

The premier requested them to stand beside the needy people instead of criticising the government and think what their contribution is for the people in such a bad time.

She also reminded all that her government is very much aware of its duty and has been working accordingly as the government’s main motto is to save the people from the onslaught of the coronavirus.

The premier reiterated her stance on taking tougher actions against the relief goods plunderers, irrespective of their political ideology.

Noting that measures have been taken in case of any irregularity regarding relief distribution, she said such problems have been seen in five to seven places although there are over 4,500 unions across the country.

That quarter is shouting time and again over those irregularities though the government is not sparing anyone involved in the misdeeds.

Besides, Zillul Hakim, MP, donated to the PM’s relief fund.

Sheikh Hasina reiterated her call to the countrymen not to mix with outsiders and to avoid mass gatherings for the sake of personal as well as family protection.

“You would have to perform your duties protecting yourselves and others,” she said.

The premier said she knows that the people particularly the day-labourers, farmers, rickshaw-van pullers and small traders have to suffer amid the ongoing shutdown in the wake of coronavirus pandemic that rendered them jobless.

Noting that her government has announced various stimulus packages considering the welfare of all types of people, she said, “We hope that we would be able to overcome the crisis (through the stimulus packages).

In this context, she said the economic activities have slowed not only in Bangladesh but also across the globe due to the coronavirus outbreak.


To counter the economic meltdown, she said, “We have to increase the industrial and food production. We are specially giving importance to ensuring food security o that the people do not suffer. The financial stimulus packages have been announced considering all these aspects. ”

She added that they have wanted to ensure that every man gets relief goods, “We are giving people foods free of cost. Foods have been distributed at night going door to door to avoid gatherings to save people from being infected with the coronavirus.”

Apart from distributing the relief, the government has been making better arrangements for the treatment of the COVID-19 patients, she said.


She said that the law enforcement agencies have been working round the clock to ease the sufferings of the people and they are even distributing relief to the distressed people at their own initiatives.

The premier, however, expressed the hope that Bangladesh would further proceed towards advancement by overcoming the bad time and the Golden Bangladesh dreamt by the Father of the Nation would be built.