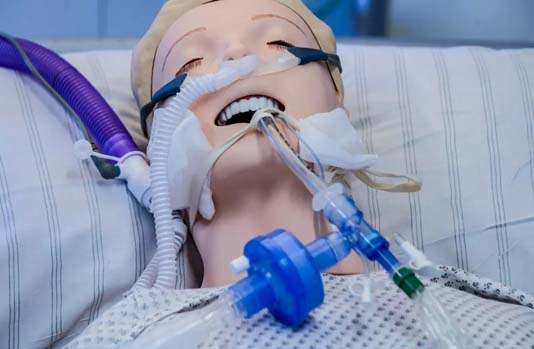 Online Desk : A global debate has emerged among doctors treating COVID-19: When should patients who need help breathing be placed on ventilators — and could intubation do some people more harm than good?
It’s one of the biggest medical questions of the day, along with how effective the antimalarial hydroxychloroquine really is, a US doctor told AFP.

The data is scarce and there aren’t yet formal studies on the subject since the disease itself is so new and we don’t have the benefit of hindsight.

It’s also impossible to know for sure whether the patients placed on ventilators would have died anyway because of the severity of their conditions.


But a growing number of doctors have said that COVID-19 patients appear to fade rapidly when they are put on ventilators and tubes are placed down their windpipes.

In recent weeks, American hospitals have started doing what they can to delay having to use the breathing machines — which the federal government ordered 130,000 of, fearing a shortage.

The first warning signs came from Italy, where the vast majority of patients placed on artificial breathing died.

The statistics are also bad in the United Kingdom and in New York, where 80 percent of intubated patients die, according to the state’s governor, often after spending a week or two in intensive care in which they are placed in an artificial coma and their muscles atrophy.

At the start of the pandemic, patients who were completely out of breath were treated under well established protocols for a severe lung condition called Acute Respiratory Distress Syndrome (ARDS).

This condition, which prevents the lungs from taking in enough oxygen to pass on to other organs, can be triggered by infection, such as pneumonia, or by physical injury.

It’s very dangerous, with studies placing the overall fatality rate at around 40 percent.

The standard procedure for these patients is to intubate relatively early, and this is how COVID-19 patients have generally been treated.


Until, that is, doctors began to realize lung complications among COVID-19 patients weren’t quite the same as “typical” ARDS patients, at least not in all cases.

The lungs aren’t damaged in the same way — they are less “stiff.”

Doctor Luciano Gattinoni and his colleagues in Milan described at the end of February how they had to adjust their procedures.

“All we can do (by) ventilating these patients is ‘buying time’ with minimum additional damage,” he wrote in a research letter to the journal of the American Thoracic Society where he argued for lower air pressure settings.

Kevin Wilson, a professor of medicine at Boston University and guideline director for American Thoracic Society guideline, agreed on the need for caution.


“Most of the health care community has gone a little nervous by these bad reports about people not doing well on ventilator, and actually is moving towards trying to delay intubation,” he told AFP.

“We delay as long as we can, but not to a point where it becomes emergent,” he added.

Doctors realized that some patients who had very low blood oxygen levels and would normally be intubated could in fact go without.

Instead of going straight to ventilators, doctors are opting to use less invasive methods — like nasal cannulas that feed oxygen up the nose, conventional or more sophisticated breathing masks, or even placing the patients on their stomachs, which helps the lungs.

Most of the new information is coming from New York, where more than 10,000 people have died from the new coronavirus.

“We try to wait a little longer, if possible keep people from even being on the ventilator,” said Daniel Griffin, chief of the infectious disease division of ProHEALTH Care Associates, a network of 1,000 doctors serving hospitals around New York. “If they look like they’re doing okay, we’ll tolerate pretty low oxygen saturations,” he added. Some recover without needing to step up the treatment.


And if they do need to be intubated, Griffin says they use different settings on the ventilator with lower air pressure.

Medical societies, including international experts from the Surviving Sepsis Campaign, are in the process of writing best practice guidelines. None yet have a definitive answer.