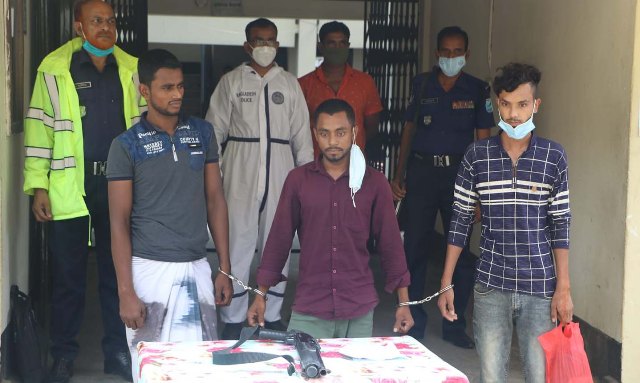 Online Desk ; Three alleged members of a gang of robbers were arrested on Friday with a shotgun looted from a Chinese factory at village Baligaon under Kaliganj municipal area in Gazipur district.

Kaliganj police arrested them conducting a raid early Friday and recovered the shotgun later on Saturday morning according to their confession.


The arrested were Harun Mia (24), son of Ramizuddin of village Birinda of Danga union under Polash upazila of Narsingdi district, Sujan Sarkar (20), son of Momen Sarkar of the same area, and Anik Mia (19), son of Kabir Mia of the same upazila.

OC AKM Mizanul Huq said an incident of robbery took place at China factory in village Baligaon under Kaliganj municipality after midnight on April 22. Though the robbers could not take any good, they looted a shotgun from the factory’s security guard. Later, factory official Hossain Ali filed a case accusing eight to nine unidentified persons with Kaliganj Police Station on April 30. Based on the case, police conducted raids at different places over the last one month. Subsequently, a Kaliganj police team including SI Sohel Molla and SI Zihadul Huq and led by OC AKM Mizanul Huq conducted a two-day raid from May 29 to May 30 and arrested three robbers from their respective homes.


Mizanul Huq said acting on the confession of the arrested robbers, police later recovered a looted shotgun from the jungle of Jinardi area under Polash upazila.