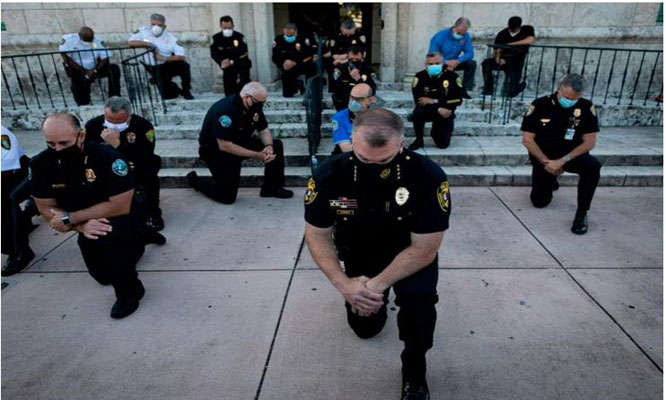 Online Desk : The viral video of New York police kneeling with demonstrators Sunday dramatically documented the cracks that have formed in the thin blue line of America’s law enforcement agencies as some officers denounced the death of George Floyd and sometimes joined the protests.

A white former Minneapolis police officer is charged with third-degree murder and second-degree manslaughter after Floyd, an African American man, died pleading for his life as the officer pinned his neck to the ground for more than 8 minutes.

Protests, many of them violent, have convulsed the country for almost a week, reports NBC News.


Some police and sheriff’s officials across the country have said the behavior of the Minneapolis officers on May 25 was unacceptable. Typical of the responses was one from Art Acevedo, the police chief in Houston, Floyd’s hometown, who said two days later that Floyd’s death should be “condemned by all in law enforcement and our extended community.”

“His death serves as a stark reminder that when bad policing happens, it disproportionately impacts communities of color and poor communities,” Acevedo said.

But as demonstrators have continued to turn out by the thousands in the face of riot police, National Guard troops and the threat of infection with the coronavirus, Acevedo and some other law enforcement officers have gone a step further.


Acevedo, who joined a Justice for George Floyd march on Saturday, addressed a crowd outside a Houston-area church Sunday, his eyes rimmed with emotion, to say not only that he understood the protests but also that he was outraged at Americans who “don’t see a problem.”

Minneapolis officers “showed no mercy when they put their knee on his neck,” Acevedo said in video published by NBC affiliate KPRC.

“For every black mother, brother, sister, uncle, cousin, they saw their family in George’s face,” he added.

When protesters arrived Saturday at the police station in Flint Township, Michigan, Chris Swanson, the sheriff of Genesee County, took off his helmet, laid down his baton and addressed the crowd.

“We want to be with y’all for real,” Swanson told the crowd in video published by NBC affiliate WEYI of Flint, adding: “I want to make this a parade, not a protest. … You just tell what you need to do.”


The crowd started chanting “walk with us, walk with us,” whereupon Swanson waved his arm, said, “Let’s walk,” and joined the march.

As hundreds of people gathered Saturday on Pacific Avenue in Santa Cruz, along the Central Coast of California, Police Chief Andy Mills joined Mayor Justin Cummings in taking a knee. The police department said in a statement that Mills knelt to demonstrate solidarity with protesters and to bring “attention to police violence against Black people.”


Police Sgt. Howard Banks denounced the Minneapolis officers’ actions, telling the crowd: “It’s all of us versus bad people and bad cops — and we want to get them out of the line of duty and police work, because they make all of us look bad.” Passing motorists honked their horns in support, WOWT reported