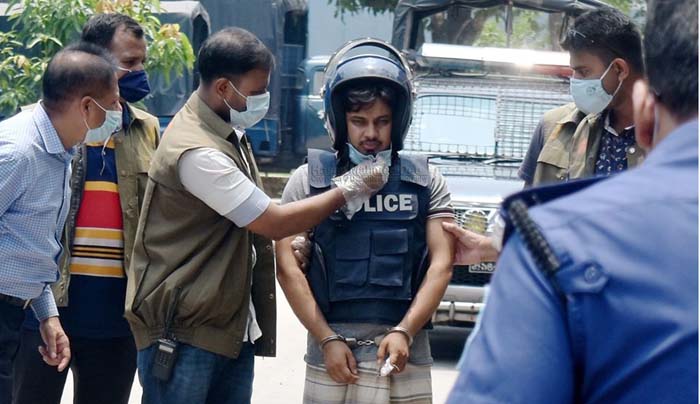 Online Desk ; Mystery behind the gruesome murder of three members of a family, including a retired bank official at Dilalpur area in Pabna district town has finally been unearthed by police.

Besides, one Tanvir Hossain, imam of a local mosque and adopted son of the slain bank official, was arrested by police as the prime suspect in the brutal murders. He is the son of late Hatem Ali, of village Haripur under Mohadevpur upazila in Naogaon district.

Following his arrest, a weapon used to commit the murders, looted jewelries and cash were recovered from his possession.

Both Abdul Jabbar and Summa Khatun were a childless couple. They brought Sanjida when she was just a one-day-old girl child. Sanjida also became 12-year-old. They lived at a two-storeyed rented house with Sanjida at Dilalpur, adjacent to the Fire Service and Civil Defence office, in Pabna town.

Jabbar and his wife got acquainted with the nearby Fire Service mosque’s imam Tanvir Hossain one and a half years ago. Being pleased at the behaviour of Tanvir, the couple started treating him like their own son. Tanvir became so closed to them that the slain Abdul Jabbar used to take him to banks and post office to draw money and other financial transactions. Tanvir also used to call them father and mother.

“According to the plan, Tanvir left Pabna town for his village home at Mohadevpur in Naogaon district on May 29 taking leave from the mosque. But, before the expiry of his leave, he came back to Pabna town and got into the house of Abdul Jabbar secretly, instead of going back to the mosque at night on May 31,” said Sheikh Rafiqul Islam.


The Pabna police super said, “At about 2 o’clock at night, Tanvir hacked Abdul Jabbar, his wife Summa Khatun and their daughter Sanjida to death when they were sleeping. He also got confirmed about the death hitting his victims on the heads with a wooden bar. Then he left the house with cash Tk 2 lakh, one lakh Indian rupee and gold ornaments.”

Receiving information from Tanvir, police went to the house early Friday (June 5) afternoon and found the bodies inside the house.

Slain Abdul Jabbar’s younger brother Abdul Kader filed a murder case with the Sadar Police Station implicating unknown accused for the murder of his brother, sis-in-law and their adopted daughter at night.

Besides, a number of police teams led by additional police super Goutam Kumar Biswas launched an investigation to unearth the mystery behind the murders.

Invsetigation officer of the case and DB’s SI Asit Kumar Basak said as per the directive of the police super Sheikh Rafiqul Islam, police conducted a raid into Tanvir’s house at Mohadevpur upazila in Naogaon district after Saturday midnight on the basis of the evidence found earlier. They arrested Tanvir and recovered looted money and gold jewelries from his house. Tanvir was shown arrested in the case after he was caught.