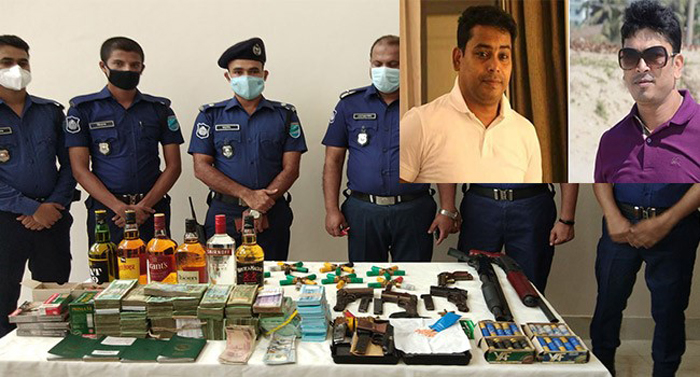 It was disclosed by Faridpur police super Alimuzzaman at a press conference held at the conference room of the Faridpur District Police on Monday.

Barkat is the publisher of the newspaper.

At the press conference, SP Alimuzzaman said two pistols loaded with bullets were seized from Barkat and Rubel’s waists.

Later, others were arrested according to their confessions.

The police super said regular cases would be filed against the arrested persons for their crimes of carrying illegal firearms, possessing liquor, and blackmarketing the government rice in their rest house.

Besides, there are allegations of grabbing lands, extortion and snatching of tenders against the arrested persons.

SP Alimuzzaman said police would plead to the court to place the accused on remand for deeper investigation.

Replying to a question, he said police would plead to the court to place each of the arrested Barkat, Rubel and Bipul on a ten-day remand, while to place the rest nine persons on a six-day remand.

The rally was held at Faridpur Press Club premises at about 11:00am which was addressed by Faridpur Kotwali Thana Awami League’s former general secretary Amitav Bose.