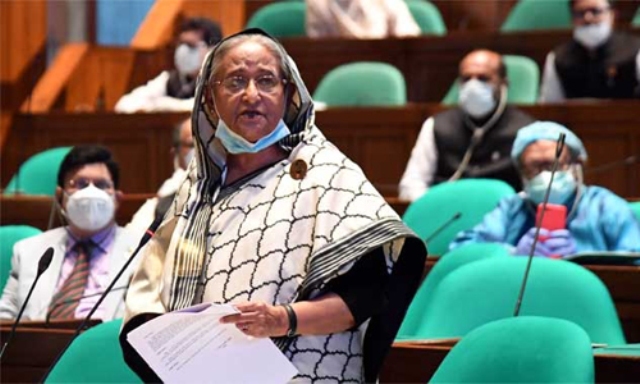 Online Desk : Prime Minister has described the deaths of Awami League stalwart Mohammed Nasim and State Minister for Religious Affairs Sheikh Mohammad Abdullah on the same day as ‘very painful’ in an emotional tribute in parliament.

“When I returned to the country, it was in no state for politics. I faced obstacles in every step. During those times, these two people were always beside me…we’ve lost them both on the same day,” Hasina said.


The prime minister was speaking during a discussion in parliament on a condolence motion on Sunday.

Nasim lost the battle for his life in hospital care on Jun 13 after suffering a stroke during treatment for COVID-19.

Later, Abdullah died at Dhaka’s Combined Military Hospital after suffering a heart attack on Saturday night. His test results came back positive for the coronavirus infection on Sunday.

“I’m standing here with a heavy heart today. The parliament only convened on Jun 10 when a condolence motion was raised after the death of an MP. And now just a few days later we’ve lost our MP Mohammed Nasim,” the prime minister said.


“I received the news of his death in the morning and later around 10-10:30 pm, I heard that Mr Abudallah was ill and had to be taken to hospital. He suffered three heart attacks in quick succession. Losing these two people on the same day is very painful.”