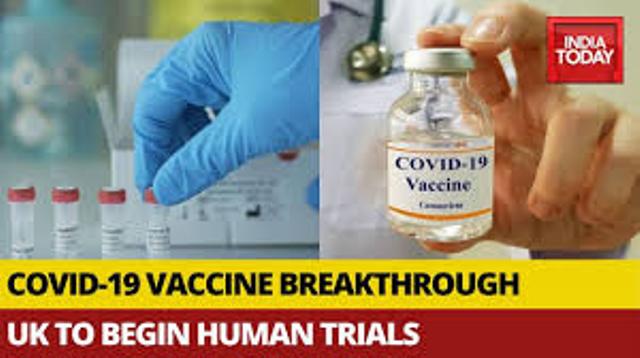 Online Desk : A team of UK scientists hopes to receive approval to begin human trials of an experimental COVID-19 vaccine this week.

The vaccine in question would harness new technology, which would mean it could be manufactured in large quantities with equipment bought off the shelf, and be relatively cheap to produce at just £3 ($3.76) per dose.
The UK government has given £18.5 million in funding toward research and trials of the vaccine, with £5 million more being donated from private sources.


The scientists, at Imperial College in London, said the new vaccine works by injecting a dose of approximately a thousandth of a thousandth of a gram of genetic material, called RNA, into the body, allowing it to begin multiplying.
The RNA would then cause human cells to begin producing a protein found on the surface of COVID-19 cells, in a large enough quantity to train the immune system to detect and neutralize the protein — enabling it to do the same if later infected with the virus itself.

Prof. Robin Shattock, the team’s leader and a mucosal infection specialist at Imperial College, said the amount of RNA required would mean that a liter of the vaccine could be enough to inoculate 200 million people.

“It really is a tiny dose,” he told The Times newspaper. “That’s very good from a safety point of view but also in terms of production — it makes it much easier to scale up.”


Animal trials conducted on mice have returned positive results, though the team cautioned that at least one booster might be required were the effects of the initial dose of the vaccine to prove insufficient.

The Imperial team expects human trials to begin within 48 hours of them being approved. The first phase will involve 120 people, before a larger trial of 6,000 people begins based on initial findings.

“We already have money from the government to make 5 million doses — that would cover 2.5 million people. That is enough for the entire health service and for care home workers,” Shattock said.

“But we also have the capacity, should we be called upon, to make enough vaccine for all the adult population in the UK.”
If the vaccine passes the human trial stage, it is likely to be distributed worldwide by social enterprise company VacEquity Global Health, which has said it will waive royalty payments, supported by Imperial College and Morningside Ventures, a Hong Kong-based investment company.


Another vaccine being developed by a team at the University of Oxford is basing its design on a similar principle to the Imperial vaccine, but by using a benign virus as a host — running the risk of the vaccine causing immunity to the already harmless host virus rather than COVID-19.