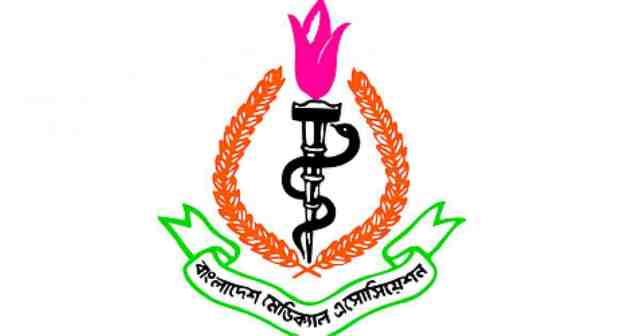 Online Desk : Doctors at all government and private hospitals went on work abstention on Wednesday afternoon demanding swift arrest of the killers of a doctor.
Bangladesh Medical Association (BMA) Khulna unit announced the work abstention from 3:30pm on Wednesday.

However, the emergency activities and treatment at hospitals dedicated to Covid-19 hospitals will be out of the programme, said Dr Sheikh Baharul Alam, president, Khulna BMA.


“Police made delay in filing the case,” he said adding that doctors demanded the suspension of Sadar Police Station’s Officer-in-Charge and arrest of all the people involved in the doctor’s killing.

“We’ll return to work when the criminals are arrested,” he said.


Dr Khan was the director of Raisa Clinic and Diagnostic Centre in Khulna and principal of Bagerhat Medical Assistants’ Training School.

The death of a mother after giving birth to a baby at the clinic led to the scuffle, said locals. Saiful Islam, younger brother of the deceased doctor, claimed that some relatives of the patients attacked his brother on Monday, leaving him critically injured.

He was immediately taken to Gazi Medical College Hospital and later was shifted to Shaheed Sheikh Abu Naser Specialised Hospital. But he eventually succumbed to his injuries on Tuesday.