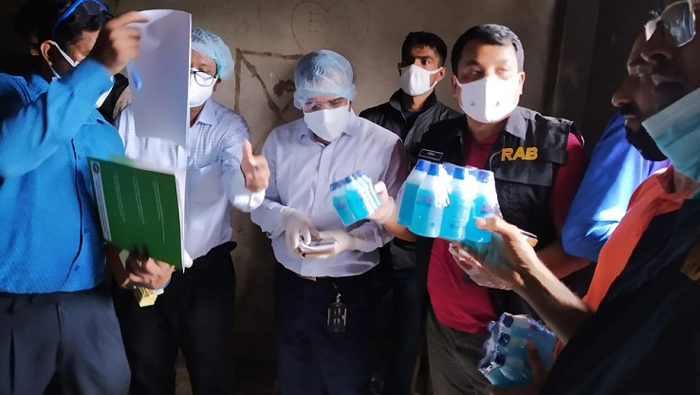 Online Desk : They were making hand sanitizers mixing blue colour, lemon flavour, spirit and gel. The ingredients required to make hand sanitizers were absent here. Besides, they didn’t have any approval from the authorities concerned to make such sanitizers.

It was learnt that the company sold hand sanitizers and hexasol worth Tk 2.5 crore in the markets in Dhaka city over the last one week.

Rapid Action Battalion (RAB) unearthed a spurious hand sanitizer manufacturing factory at the basement of a flat building at Rayerbag area, opposite to Jatrabari bus stand in the capital on Thursday afternoon.

During the raid, a mobile court of RAB-10 found a large quantity of hand sanitizers which were not approved by the authorities concerned of the government.

Three of the arrested persons were given two-year jail sentence, while the other was fined Tk 2 lakh, in default, three months’ jail sentence.

The Executive Magistrate said the arrested persons made two lakhs bottles of hand sanitizers woth Tk 2.5 crore, and sold those in different markets in the capital last week.

Polash Chandra Basu also said a section of dishonest businessmen have resorted to making fake masks and hand sanitizers during the coronavirus pandemic in the country as their demand has become skyrocketed.