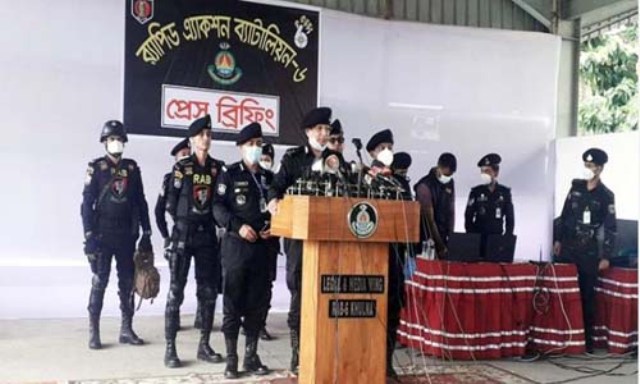 Online Desk ; Three members of notorious ‘Khna Bahini’ were killed in a gunfight with the Rapid Action Battalion (RAB) in the Sundarbans on Saturday night.

Two more bandits were arrested and two fishermen rescued after the gunfight that took place Haradah area under Satkhira Range of Sundarbans, confirmed in a press briefing on Sunday afternoon.

The deceased are: Shariful Islam,24, and Habibur Rahman,24, of Satkhira, and an unidentified youth, aged around 25.

The identities of the detainees could not be known immediately.

Five firearms, 33 bullets and some lethal arms were also recovered during the drive.

The three bandits were killed during the drive in Haradah area on Saturday night.

In the briefing held at RAB-6 office in Khulna around 12:30pm, new RAB DG Chowdhury Abdullah Al Mamun warned that if anyone tries to commit robbery in the Sundarbans again, would have to face the same consequence.

He asked the bandits to leave their way of living, saying, “None will be spared from our vigilance.” RAB additional DG Col Tofayel Mostafa Sarwar and RAB-6 commander Lt Col Rowshanul Firoz were also present.