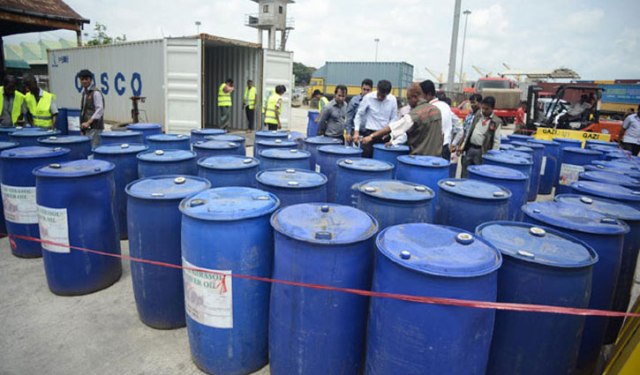 Online desk : Rapid Action Battalion (RAB) has submitted its charge sheet against 10 people in a case filed over the smuggling of liquid cocaine in edible oil through Chattogram port.

Four of them are absconding, Prime accused Nur Muhammad is on bail and absconding and five of them in Jail.

Meanwhile, the cocaine was seized from Chattogram Port in 2015 last.

The Detective Branch of CMP was informed that cocaine was imported in Chattogram Port, in name of sunflower oil on June 6 in 2015 last.

The container was imported from Bolivia in the name of Khan Jahan Ali Limited of Khatunganj in Chattogram. As per the import documents, the consignment was that of sunflower oil.

The customs authority sealed off the container at the NCT yard of Chattogram Port on June 7 based on an intelligence report.

The physical test of the contents was done the following day in presence of senior officials of detective branch (DB) of police, customs intelligence, Department of Narcotics Control, Chattogram Port Authority (CPA) and Bangladesh Navy.

The primary test found no trace of cocaine in the 107 drums in the container.

On that day, the then additional inspector general of police Javed Patwary said a foreign intelligence agency had confirmed them that there was cocaine in the container.

Six persons are now in the jail for import of cocaine in the name of sunflower. They have been interrogated several times earlier.

Meanwhile, a total of 370 litres of cocaine worth about Tk 9,000 crores have been demolished in Chattogram on February 5 this year