At a glance: All the latest Covid-19 global developments 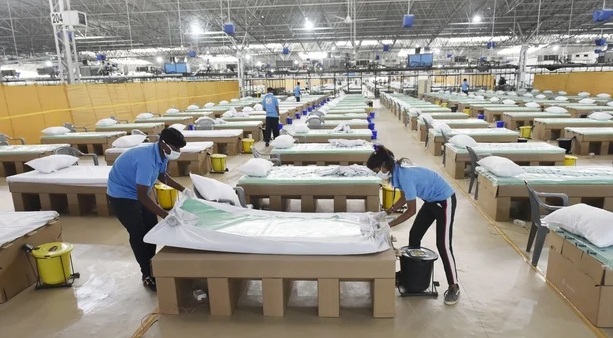 Online desk : US virus toll passes 130,000 The pandemic has killed at least 535,000 people worldwide since it surfaced in China late last year, according to an AFP tally at 1900 GMT on Monday based on official sources.
The United States is the hardest-hit country with 130,080 deaths.

The world’s hardest hit country, both in confirmed cases and deaths, the United States has experienced a resurgence of the disease since June that has forced several states to suspend their phased economic reopenings.

On Saturday, the number of new daily infections hit a record 57,683.

US officials warned yesterday their hospitals were in danger of being overwhelmed by the upsurge.

Hospital beds are full in parts of Texas, while calls for fresh stay-at-home orders are growing. Some mayors say their cities reopened too early, as President Donald Trump tries to downplay the disease that has gripped much of the country.

Steve Adler, the mayor of Austin, Texas, also expressed concern that the healthcare system could buckle as the disease spreads rapidly.

“If we don’t change the trajectory, then I am within two weeks of having our hospitals overrun. And in our ICUs, I could be 10 days away from that,” he told CNN.

Stock markets around the world rally, with optimism at fresh signs of economic recovery overriding concerns at a global surge in coronavirus infections.

On Wall Street, the Dow Jones was more than 350 points higher in the late New York morning, while key European markets posted gains of 1.5% or more at the close.

Covid-19 could cause an additional half a million AIDS deaths if treatment is disrupted long term, the United Nations says in a warning that the pandemic is jeopardising years of progress against HIV.

Key populations at high-risk of HIV/AIDS are being put in further danger as lockdowns and distribution of medicines leaves them “even more vulnerable than usual”, the report at the start of a week of virtual International AIDS Conferences says.

An international group of 239 scientists urges authorities including the World Health Organization to recognise that the coronavirus can spread in the air at distances well beyond the two metres often recommended for social distancing.

“Hand washing and social distancing are appropriate, but in our view, insufficient to provide protection from virus-carrying respiratory microdroplets released into the air by infected people,” wrote the authors, led by Lidia Morawska of the Queensland University of Technology in the Oxford Academic journal Clinical Infectious
Diseases.

Since the beginning of the virus outbreak, Bolsonaro has minimised the risks of what he initially called “a little flu” and flouted social distancing rules and containment measures, such as wearing a mask in public.

Kenyan President Uhuru Kenyatta has announced a “phased reopening” of the country, with the resumption of international flights from 1 August as well as the lifting of internal travel restrictions.

However, a curfew from 9pm to 4am will remain in place for another 30 days. Kenya has recorded just over 8,000 cases of the virus and 164 deaths – the highest official figures in East Africa.

Australia to seal off virus-hit state as outbreak worsens

Meanwhile Australia will effectively seal off the state of Victoria from the rest of the country, authorities said, announcing unprecedented measures to tackle a worrying surge in coronavirus cases.

For the first time since the pandemic began, the border between Australia’s two most populous states – Victoria and New South Wales – will be closed from midnight tomorrow, officials from both states said.

Victoria – home to more than 6.6 million people – announced a record 127 new cases today, as the virus spread through Melbourne, including a cluster in several densely populated apartment blocks.

India has said it had logged nearly 700,000 coronavirus cases, taking it past Russia to become the world’s third-hardest-hit nation in the global pandemic.

India said it diagnosed a record daily number of cases across the vast nation where medical facilities are uneven and many Covid-19 infections are likely to be undiagnosed.

India has registered 19,963 deaths from the virus, a much lower number than many other badly hit countries.

India reported 25,000 cases and 613 deaths in 24 hours – the biggest daily spike since the first case was detected in late January.

The world’s most visited museum, the Louvre in Paris, has reopened after nearly four months of coronavirus closure, with a restricted number of visitors enjoying a rare chance to view masterpieces such as the Mona Lisa and the Venus de Milo.

Several dozen tour guides wearing masks and holding Mona Lisa portraits protested outside the Louvre seeking for more support from the French government to help them ride out the coronavirus crisis and a dearth of tourists.