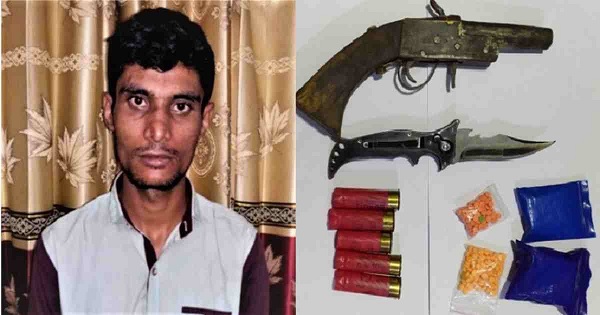 Online desk : A murder accused was killed in a reported gunfight with police at Jharnapara Jor Doba in Chattogram’s Pahartoli area early Wednesday, hours after he killed his three-year-old nephew by slitting his throat over family feud.
The deceased was identified as Jashim Uddin Raju, 32,

Sudip Kumar Das, Officer-in-Charge of Double Mooring Police Station, said Raju, a resident of Hazipara in the city had an altercation with his sister-in-law Nilu Akter over family issues on Tuesday night.

At one stage, Raju killed his nephew Mehrab, 3, son of Mohammad Rashed, after slitting his throat and fled away.

On information, police went to the spot and recovered the body of Mehrab around 12 am. A case was filed in this connection in the night. Later, a team of police conducted a drive to arrest Raju.

After receiving information, Raju along with his associates gathered in Jharnapara area, police went to the spot and challenged them, said the OC.

Sensing presence of the law enforcers, Raju opened fire towards police, forcing them to fire back that triggered a gunfight.

Raju was caught in the line of fire and died on the spot while the others managed to flee the scene. Five policemen, including OC Sudip Kumar ,were injured in the gunfight.Raju was wanted in 13 criminal cases, said police. One LG gun, one cartridges, four bullets and 875 Yaba tablets were recovered from the spot.