Drive against corruption must go on: PM 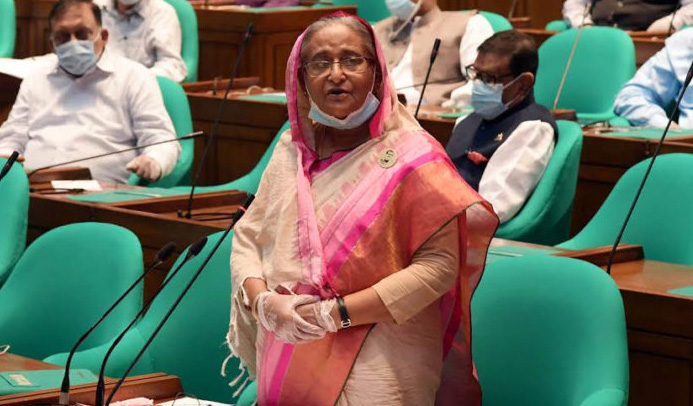 Online desk : Prime Minister Sheikh Hasina on Thursday said her government would continue the dragnet against those involved in corruption and irregularities irrespective of their political affiliation.

“We have been trying our best to check corruption and irregularities since the Awami League assumed office. The drives against the menaces would be continued in the days to come as we cannot tolerate those anymore,” she said in parliament, reports BSS.

The Leader of the House said it is not a big matter who belongs to which party, adding that her government makes arrests of the corrupt elements irrespective of their political identities.

The prime minister said these in her valedictory speech at the Jatiya Sangsad when her attention was drawn to corruption and irregularities in various sectors, particularly in health and financial sectors, by some opposition lawmakers, including Deputy Leader of the Opposition GM Quader.

The sitting of the eighth session which was also a budget session of the 11th parliament for the fiscal year (FY) 2020-’21 that started at 11 this morning with Speaker Dr Shirin Sharmin Chaudhury in the chair was prorogued in the afternoon.

The premier said her government is taking actions whenever any news relating to irregularities is surfacing.

She, however, expressed her dismay that some people have been making attempts to brand her government a corrupt one as the authorities are capturing the corrupt elements.

The premier added that the character of the people had been destroyed by the military government which came to the power at the dark of night using firearms after the August 15, 1975 bloody carnage.

“Military dictators have taught the people from top to bottom how to be corrupt, earn black money and be loan defaulters just to give their illegally grabbed power a strong footing,” she continued.

The Prime Minister said that it would be tougher to eliminate corruption and irregularities completely from the society as the military dictators gave an institutional shape to those staying in power years after years.