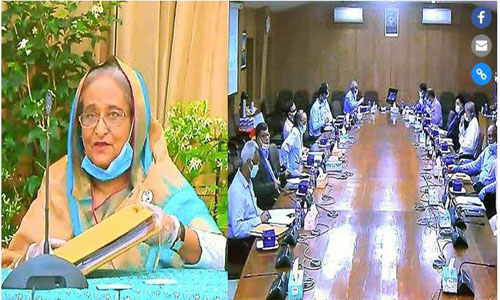 Online Desk : The cabinet on Monday in principle gave a nod to a draft law to build a medical university in Khulna division to be named after Prime Minister Sheikh Hasina as a part of the government’s measures to expand and develop the scope for higher medical education, research, and healthcare services in the country.

The approval came from a cabinet meeting with Prime Minister Sheikh Hasina in the chair, reports BSS.

“The cabinet today in principle approved a draft of the “Sheikh Hasina Medical University, Khulna Act, 2020” to establish a medical university in Khulna division,” Cabinet Secretary Khandker Anwarul Islam told a news briefing through a videoconference after the meeting.

The premier was connected from her official residence Ganabhaban, while ministers and secretaries attended the meeting from the Bangladesh Secretariat here.

The main purpose of establishing medical university in Khulna is to groom and buid highly-educated experts and researchers alongside maintaining and improving the standard of education and research in medical colleges at graduate and post-graduate levels, he said.

Scopes for getting improved healthcare services would be expanded by setting up the proposed medical university, he said, adding that all the public and private medical colleges, dental colleges, nursing colleges and institutes and other medical institutes in Khulna division will be affiliated to the university.

The cabinet also approved a draft agreement to be signed between Bangladesh and Micronesian country Palau. About the cabinet decisions taken in the first quarter of this year, Anwarul said around 65 percent decisions were implemented from January-March this year.

“As many as 46 decisions out of 71 have already been executed, while remaining 25 others are at the implementation stage,” he added.