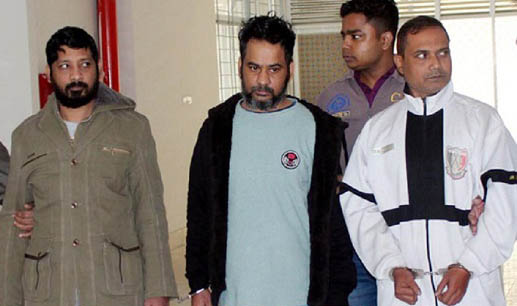 Online desk : Two Awami League leaders of Old Dhaka Enamul Huque Enu and Rupon Bhuiyan have accumulated huge wealth getting involved in casino business activities over the last five years.
Enu and Rupon are two siblings. They have been involved in gambling business from much earlier. It was their family business.

The emergence of the Enu and Rupon brothers are mainly happened due to the patronisation of Wanderers Club secretary Joy Gopal. The CID has recenly arrested Joy Gopal.

However, they got involved in casion-based gambling business in 2014. Then they have accumulated huge wealth. Their wealth include 25-katha residential land, 20 houses, 128 flats etc.

“They had transacted over Tk 200 crore through their 91 bank accounts and they owned 128 flats in Dhaka, which they brought with money earned from illegal casino business,” Imtiaz Ahmed, Deputy Inspector General of Organised Crime Unit of CID, revealed the sensational information at a press briefing on early Tuesday afternoon at its head office.

The CID official disclosed the information as his office is near the completion of investigation against the brothers.

“During the investigation, we found 20 houses, 128 flats, 25 katha of land around Dhaka city. We are tracing for more land,” Imtiaz Ahmed said, adding that they found 91 bank accounts of two casino brothers, where they have now Tk 19.11 crore with seven private banks at Bongshal, English Road, Nayabazar, Motijheel, Shantinagar, Gulshan, Dholaikhal and Nawabpur, he said.

He said Wanderers Club started One Ten game back in 2007 and introduced casino in 2014.

Most of the property bought and money transacted by these siblings have been done during the past five years—2014 to 2019.

“Most of their property are in the country. Investigatin into four money laundering cases filed against two brothers are at the final stage. The CID would submit investigation reports withing the next one week,” he said.

“The money [earned] is basically spent on jewellery, lands, properties,” he added.

The siblings’ father and their other brothers were also involved in the gambling business, though their apparent business is steel one, said Imtiaz.

The CID would submit charge-sheet in four of the five cases it had investigated by next Tuesday, said DIG Imtiaz.

“There are five money laundering cases against them. Investigations of four of them are near the end,” he said. The rest would be completed by the end of the month.