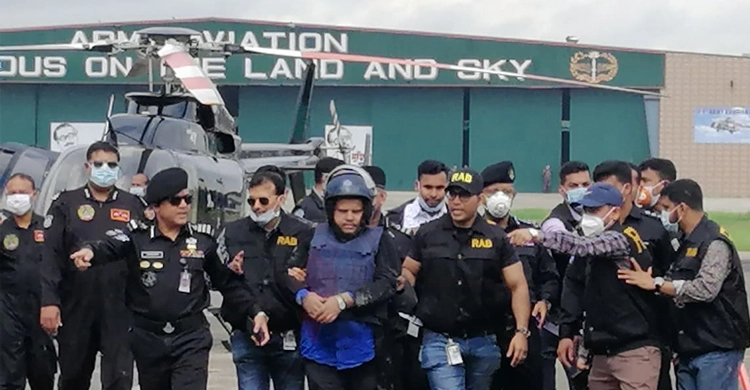 Online Desk : Regent Group chairman Mohammad Shahed alias Shahed was arrested from the border area of Satkhira early hours of Wednesday.
Members of Rapid Action Battalion (RAB) in a special drive nabbed him from the bank of Labangaboti river in Komorpur village under Debhata upazila at 5:10am, Ashique Billah, director of RAB’s legal and media wing, confirmed.

Shahed was brought to Dhaka by a helicopter which landed around 9am at Tejgaon airport. Huge number of illegal arms was recovered from his possessions.

Shahed, wearing ‘Burqa’, tried to flee away to India through the border area to escape arrest, the RAB official said. He will be first taken to RAB headquarters.

On June 7, a RAB team led by Magistrate Sarwar Alam raided Uttara branch of Regent Hospital and found around 6,000 fake coronavirus reports, which had been sent out without conducting any tests.

The hospital is also accused of charging Tk 3,500 per test, despite of it being a COVID-19 dedicated hospital. Later, the RAB sealed of both Uttara and Mirpur branches of the hospital.