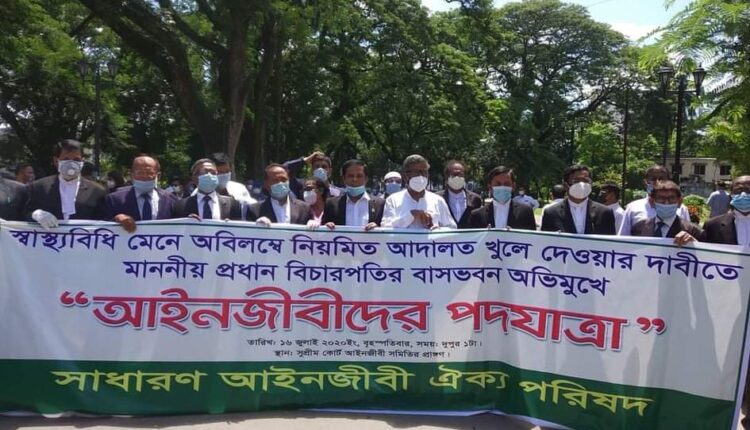 Online Desk : A march of lawyers towards the official residence of Chief Justice Syed Mahmud Hossain at Kakrail in the city demanding to reopen all the courts across the country has been foiled by police.
Some 150 lawyers under the banner of ‘Sadharan Ainjibi Oikya Parishad’ assembled at the Supreme Court Bar Association (SCBA) building premises at about 1:00pm and formed a human-chain there.

When the lawyers started to march towards the Chief Justice’s residence at Kakrail at about 1:30pm, police obstructed them at the exit gate of the Supreme Court near the SCBA area.

Then they took position inside the gate and continued their protests chanting various slogans.

Police stopped the lawyers soon after they gathered at the SC exit gate, said Advocate Monir Hossain, one of the organisers of ‘Sadharan Ainjibi Oikya Parishad’.

“We can’t continue with virtual courts, instead of regular court, any more as litigants and lawyers have been suffering immensely due to the closure of the courts in the country,” he said. He alleged that police foiled their peaceful agitation programme which was launched with a logical demand.