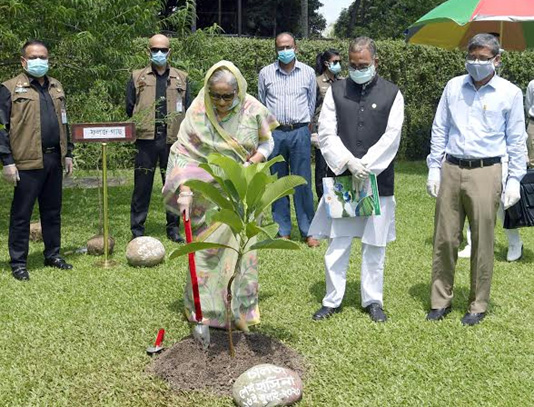 Online Desk : Prime Minister Sheikh Hasina on Thursday inaugurated the distribution and plantation of one crore saplings across the country marking the “Mujib Borsho” (Mujib Year) and reiterated her government’s goal of increasing the country’s forest coverage to 25 percent.

“When we formed government in 1996, the country’s forest coverage was only 7 percent and then we raised it to 17 percent. Now, our target is to enhance the (forest) coverage to 25 percent and we’re working relentlessly to achieve the goal,” she said after launching the programme at her official Ganabhaban residence here this morning.

Sheikh Hasina also inaugurated the National Tree Plantation Campaign 2020 through the same event, reports BSS. The premier reaffirmed her call to the people to plant more trees to protect environment, saying that saving natural environment is a must.

“I would like to urge all to plant trees at places whatever you have and whatever you can. Those, who live in towns, can plant trees on rooftops or tubs of the balcony of their house,” she said.

She continued: “If you plant trees, you feel good and your mind will remain always fresh. Besides it will bring your solvency … you feel well if you eat a green chilli of the tree planted by yourself. So, let’s come to plant trees together.”

“Bangladesh is a deltaic country and let’s come to protect and develop it by planting trees in a massive way,” she added. The prime minister also said that the plantation of trees is very much essential for ensuring food and nutrition of the people alongside their economic prosperity.

“Keeping this in mind, our party Bangladesh Awami League has been planting trees since 1984 and we start the tree plantation campaign every year on the first day of Bengali month of Ashar,” she said.

“Today, we take the programme in his memory,” she said, adding this programme has been taken to create aforestation and green belt across the country.

Sheikh Hasina said from the beginning she is urging the people to plant at least three trees – one fruit, one wood and one medicinal.

“Today, I launched the distribution and plantation of one crore saplings by planting three trees — ‘chalta’, ‘tetul’ and ‘chhatiyan’ – on the Ganabhaban premises,” she said.

Earlier at a virtual meeting on July 12, Minister for Environment, Forests and Climate Change Md Shahab Uddin said the prime minister will inaugurate the distribution and plantation of one crore saplings across the country by planting saplings on Ganabhaban premises on July 16.

The minister also said after the inauguration of the programme by the prime minister, three saplings — one fruit, one wood, and one medicinal — will be officially planted in every district and upazila.

Later, 20,325 saplings will be planted in each of 492 upazilas of the country at a convenient time in the current tree plantation season from July 16 to Sept 15 by maintaining the health codes in the wake of coronavirus outbreak, Shahab Uddin said.

“Following the footsteps of Father of the Nation Bangabandhu Sheikh Mujibur Rahman who first started tree plantation drive in the country, this programme is being implemented in the ‘Mujib Year’ to maintain the balance of environment,” the minister added.